1967: Chris Amon, Scuderia Ferrari and a year of living dangerously 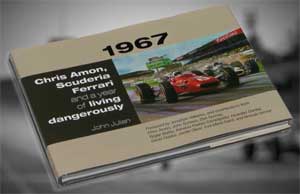 The times they were a-changin’ in 1967, and so was the international racing scene. Thanks to John Frankenheimer’s movie Grand Prix, released the year before, celebrity sightings were now a common thing in Formula One paddocks. Unfortunately death was becoming an ever more common one as well. It’s this clash of celebrity and fatality that is the backdrop to John Julian’s book 1967: Chris Amon, Scuderia Ferrari and a year of living dangerously. Chris Amon is a name often overshadowed by his contemporaries such as Jackie Stewart, Jim Clark, and John Surtees; but at the time he was known as a driver’s driver. This Must Read masterfully chronicles Amon’s first year as a factory Ferrari driver and how 1967 was a major turning point for both motor racing and for the world at large.