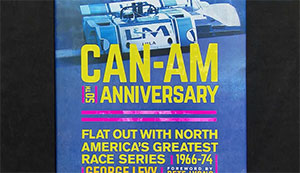 No matter which racing series you follow today, it’s an unfortunate fact that all of the cars racing against one another, are more alike than they are different. But there was a time when that wasn’t the case. George Levy celebrates those times in Can-Am 50th Anniversary: Flat Out with North America’s Greatest Race Series 1966-1974.  Can-Am was one racing series where “run what you brung” was truly taken to heart; and was accompanied by many advances in automotive technology that we take for granted today, particularly in the area of aerodynamics. It was a time when backyard engineers truly could keep up with the big boys and their limitless resources. It’s one fun and informative Must Read.