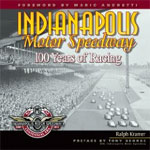 In 1909, four men purchased 320 acres of Indiana farmland for $500, beat out a loop of hard-pack, and called it the Indianapolis Motor Speedway. Since then, it has become the most recognizable venues in racing. In anticipation of the Speedway's hundredth anniversary, Ralph Kramer penned Indianapolis Motor Speedway: 100 Years of Racing, a book of pictures to commemorate the track's fascinating history. Kramer is quick to acknowledge that this is not a definitive history of the racetrack, but that doesn't detract anything from this handsome hardcover. From the evolution of the track-side "Pagoda" to the faces on the Borg-Warner Trophy, Kramer doesn't miss a beat. With a foreword written beautifully by Mario Andretti, Indianapolis Motor Speedway: 100 Years of Racing is destined to become a classic. And for $30, it's a good deal, too.