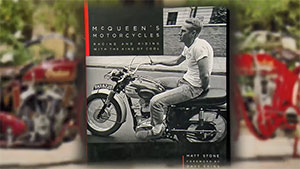 There is no shortage of books out there about Steve McQueen. But while most are focussed on his movies, cars or racing exploits, Matt Stone’s McQueen’s Motorcycles keeps the topics to just that; his motorcycles. McQueen reportedly owned around 200 of them in his lifetime. The first half of the book gives some backstory and into how he developed his love affair with two wheelers. While the second half goes into more detail of some of the more significant motorcycles that he owned. It’s a quick Must Read perfect for both fans of motorcycles and the ultimate King of Cool.