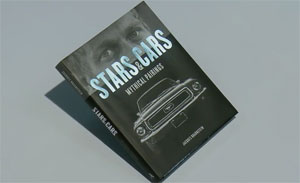 Stars & Cars: Mythical Pairings by Jacque Braunstein is a loving look at the close relationship of cars with film and television actors. 20th Century icons like Steve McQueen, James Dean, Don Johnson, Clint Eastwood, and Vin Diesel, all were emotionally involved with cars both on and off camera.  also looks how entire film projects use the car culture as a core for storytelling. A wide variety of vehicles are featured; accounting for the different tastes of the actors, as well as a film’s storyline. With High-quality photos supplementing the text, Stars & Cars is an educational yet introspective look at automobiles in the film industry.  A great Must Read for car lovers and film buffs alike.