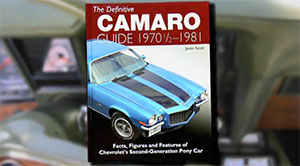 While 1st gen Chevrolet Camaros draw most of the collector car attention, it’s a matter of fact that the original Camaro was a hastily assembled compromise based on the Chevy II, so that GM would have something to counter the wildly popular Ford Mustang. It wasn’t until the ground-up design of the 2nd generation that GM really had something on their hands.

And indeed, it was the most popular generation to date, with almost 2-million sold.  If you want to learn more about these American classics, pick up a copy of The Definitive Camaro Guide: 1970½ - 1981.  In this Must Read, Jason Scott tells the story behind the development, as well as gives you a complete run through of model year changes; along with plenty of pictures, so you know what to look for if you’re in the market for one of these highly collectible, highly fun hot rods.