Christmas came early for the automotive world, as the 2012 L.A. Auto Show gave us a sneak peek at what will generate a big buzz in the new year. As this is California, buzzing into view were a bevy of new, all-electrics. 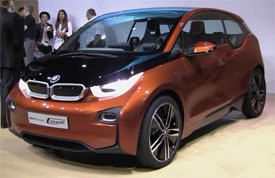 BMW looks ready to add to its electrified sub-brand with this futuristic i3 Concept Coupe. This Chevrolet Spark EV claims the longest driving range in its class. Which includes a new battery-powered version of Fiat’s mini-car, the 500e. The Fiat line is also expanding with the Five-door 500L, along with a convertible variant of the hot rod 500 Abarth.

But what’s more Californian than a convertible? Volkswagen has the answer with their new Beetle drop top in perfect step. Especially when the available 2.0-liter turbo diesel is paired with a 6-speed manual for over 40 miles per gallon while cruising in the sun.

Diesel fans were thrilled to hear the news that Audi will add a turbo diesel V6 power to its U.S. bound A6, A7, and A8 carlines, and the mid-size Q5 crossover. On the gasoline front, the 3-cylinder 1.0-liter, Ecoboost Ford Fiesta subcompact is finally here, with a new front end and yet, another “40 MPG-Plus” claim.

The “don’t-say-minivan” Ford Transit Connect Wagon also made its debut. 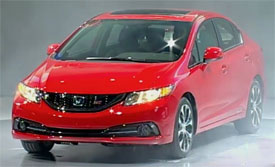 The more conventional Honda Civic gets a rework after only one year to address less than rave reviews. The sedan’s exterior is tweaked, the interior is overhauled with new shapes, better materials, and an all-around classier look. The hybrid sportster CR-Z got a little love too, and boasts more power and efficiency for the new year.

Two mainstay compact crossovers also made debuts; the redesigned Toyota RAV4 is sleeker outside, with slimmed down powertrains under the hood.

While the new Subaru Forester is less box-like, it does include more room and a 250 horsepower turbo engine option. 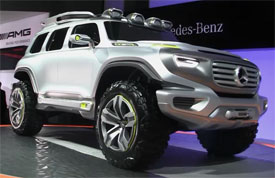 The hydrogen powered Mercedes-Benz Ener-G-Force is a tease for a future G-Wagon… while this SLS AMG Black series is here and now with a monster 622 horsepower V8.

Arriving too was a new 7-seat Outlander crossover from Mitsubishi.

While, Jaguar’s F-Type made its first U.S. splash…along with a new M5 fighter, the XFR-S.

And the “Green Car of the Year” was also announced; the 2013 honor goes to the Ford Fusion with turbocharged, hybrid, and plug-in models.