The 2013 Auto Show circuit made its annual stop in Chicago along its whirlwind, worldwide tour. And of course, MotorWeek was there for the entire story.

From hotrods to haulers, we saw quite a few world debuts at the 2013 Chicago Auto Show. 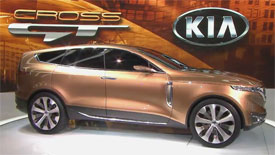 First from Kia, who turned heads with this Cross GT concept. Sporting a sleek crossover profile, and an estimated 400 horsepower from its hybrid V6 engine. A 5-door version of the just released Forte was also shown, with the top level models sporting an exclusive 201 horsepower 1.6 liter turbo 4.

Chevrolet uncovered the 2014 Cruze Diesel. Aimed at VW’s Jetta TDI, power is Opel’s 2.0-liter turbo diesel. Ratings are 148 horsepower, a big 258 pound-feet of torque, and 42 MPG on the highway. 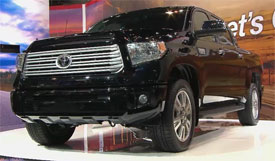 But, the biggest announcement, quite literally, was the 2014 Toyota Tundra full-size pick-up. While engines and chassis are the same, a more granite-like exterior and super lux interior look to shore up sales against Detroit competition…

…Including from RAM, who, fresh off the success of the new 1500, debuted its new ProMaster commercial truck line. Based on the Fiat Ducato, the Mexican built high cube comes in both front-drive gas and diesel.

Nissan revealed NISMO tuned up versions of the tiny Juke, with new suspension, exterior cladding, and engine output ratcheted up to 197 horsepower……and the 370Z, with stiffer springs, and unique body styling. Likely to be even more fun is the 2014 Nissan GT-R Track Edition. With no rear seats, a ducted carbon fiber front spoiler, and a beefed up suspension, it looks to hit the track harder than ever. 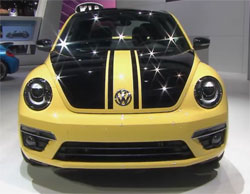 Chrysler tuners were hard at work, too, as they showed the Challenger R/T Redline with HEMI V-8 power…..and the MOPAR Dodge Dart, with blue racing strips and upgraded brakes.

Volkswagen tweaked their latest Beetle Coupe with a historic GSR package, cranking horsepower up to 210 under a bumble-bee paint job.