It’s that time of year again, folks…time for the LA Auto Show. And MotorWeek was out west for all the latest unveils.

The City of Angels answered more than a few automotive prayers with reveals of some long-awaited models. 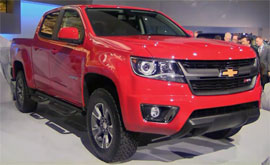 Red-blooded Americans should welcome the return of the Chevrolet Colorado as a domestic brand returns to the mid-size pickup segment. Sportier than the full-size Silverado, the pick up’s gas engine choices are four or six cylinder, with a diesel to follow later.

Porsche finally pulled the wraps off of the compact Macan SUV with a twin-turbo V6 good for 400 horsepower.

Jaguar showed off the F-Type Coupe, including an R upgrade with revised suspension and drivetrain dynamics.

BMW, meanwhile, took the top off of their new 4 Series, announcing its new hardtop convertible. 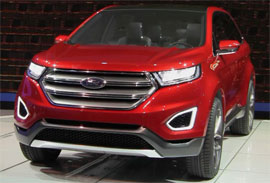 Subaru gave us a glimpse at their new mid-size Legacy sedan. And we learned much more about the 2015 WRX, with both 6 speed manual and CVT transmission choices.

At the opposite end comes the all-new 2015 Mini Cooper. Although to be fair, it too has grown in both size and sophistication.

Acura’s RLX Sport Hybrid is powered by a V6 gasoline engine and 3 electric motors for a total of 377 horsepower.

Sporting 577 horsepower is this Mercedes-Benz AMG Vision Gran Turismo Concept. But, you’ll have to buy the namesake video game to drive it.

And speaking of green, the 2014 Green Car of the Year award goes to the Honda Accord, which added a Hybrid model to its lineup of fuel efficient gasoline and plug-in hybrid versions.

And that’s it for this week’s MotorNews from the left coast and the 2013 LA Auto Show.