And no carmaker delivered more of both than Nissan. 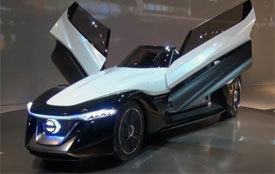 This BladeGlider concept is a pure electric with a radical Delta-wing shape that promises guilt-free sports car fun for three. The Nissan GT-R is definitely a guilty pleasure, but is more refined on road for 2015 and adds a 600 horsepower NISMO-tuned edition. The IDx Freeflow and IDX NISMO concepts are modern sports cars with a retro twist co-developed with a group of teenage enthusiasts.

Lexus fills a void in their lineup with this gorgeous RC sport coupe. Gas or hybrid power will be on tap when it debuts in 2014.

Honda finally showed a production-ready NSX and a mini-me version: This concept mid-engine roadster is the S660 concept. The Honda Vezel is an urban mini-SUV that could bring big style to this market segment.

Subaru’s big splash was this Levorg prototype sport-touring wagon, but they also turned heads with the Cross Sport Design concept and the Viziv Evolution. 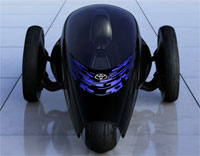 Toyota renewed its commitment to Hydrogen fuel cell power with this FCV concept. And, they showed a vision for future personal transport with the FV2, a 1-passenger pod that can suggest a destination or change its own color to match the driver’s mood.

A sea of red couldn’t camouflage Mazda’s newest SKYACTIV green offerings: A CNG-fueled Mazda3 and a hybrid powertrain for the sedan only, which is known as the Axela in Japan.

And that wraps up our whirlwind tour of the 2013 Tokyo Motor Show and this week’s MotorNews !