It’s time once again for the car world to trek to Detroit for the North American International Auto Show. And for 2014, there’s more that’s exciting and innovative than ever! So let’s check out this year’s headliners from the Motor City…

Outside Detroit’s Cobo Hall temps were near freezing, but inside the atmosphere was hot with excitement, as Ford unveiled the 13th-generation of America’s bestselling vehicle, the 2015 Ford F-150. 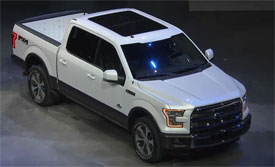 This new F-150 reinvents the full-size pickup truck with its first time all-aluminum body. That, plus more high strength steel in the frame, cut weight by up to 700 pounds. There are four engines available, two with Ecoboost power, including an all-new 2.7-liter turbocharged V6.

Detroit also celebrated the 50th anniversary of the Ford Mustang with the first public showing of the all-new 2015 edition. It blends classic proportions with modern styling, power, and standard independent rear suspension. A new turbo-4 will lead in fuel economy with both V6 and V8 also in the arsenal.

Detroit also showed the production Lincoln MKC compact crossover. While based on Ford’s Escape it clearly looks different and its unique 2.3-liter Ecoboost engine will ensure it drives that way. 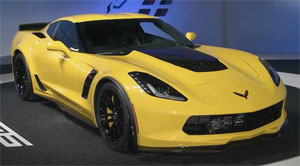 Detroit’s red hot fever continued at Chevrolet. Following last year’s debut of the C7 Corvette Stingray is this year’s equally anticipated ZO6. With 625-plus horsepower, the ZO6 was developed alongside the C7.R race car and shares many of its brutish cues.

General Motors re-enters the small pickup market with a two-some. Unveiled in LA, the mid-size 2015 Chevrolet Colorado has a decidedly sporty flair to separate it from big brother Silverado. Meanwhile, the mechanically similar GMC Canyon made its big splash here looking both more serious and more expensive. The even better news however is that a diesel option is due in a year.

Cadillac looks to continue its string of successful launches with this ATS Coupe. With ultra-clean lines and tech laden interior, the ATS Coupe promises the same superb road manners as the sedan, while adding even more luxury. 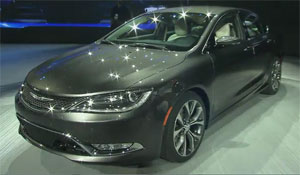 The “Made In Detroit” saga continues with the unveiling of an all-new Chrysler 200 mid-size family sedan. A critical car for Chrysler, the 200 shows the brand’s new face while sharing its Alfa-based chassis with the Dodge Dart and Jeep Cherokee. Styling, both inside and out, border on gorgeous, with 4 and 6-cylinder power, a 9-speed automatic transmission for 35 MPG economy, and a super-efficient all-wheel drive option.

While this is Detroit’s big show, the 2014 North American International Auto Show draws thousands of press from around the world. And, there’s plenty of global car news to make their trip worthwhile. Press days kick off with the 21st annual North American Car and Truck/Utility of the year awards. 49 journalists cast secret ballots to pick the year's top models.

Both vehicles, clear proof that GM and Detroit are back! But import brands were busy making Motown history too.

Over at Acura, this TLX sedan concept will replace both the mid-size TL and compact TSX when it arrives for real. With mildly racier bodywork, Acura calls it “athletic”, 4 and V6 engines, an 8-speed DCT transmission, and Super Handling all-wheel drive; it looks ready to go fast.

But the raciest new car at Detroit is the Toyota FT-1. A sports car concept celebrating 40 years of the U.S. Calty Design studio. Toyota says that if the public likes its snarky, track-focused, FR-S on steroids look, that much of this “Future Toyota” could end up on a new sporty model, perhaps a Celica or Supra. 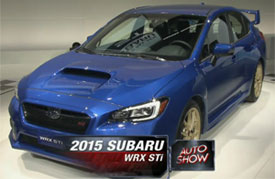 Subaru is sharpening up its top sport sedan with an all new WRX STi. Packing 305 supercharged flat-four power, it arrives with a slick shifting 6-speed manual only, and all-wheel drive with new driver controlled center differential. Evo owners lookout! 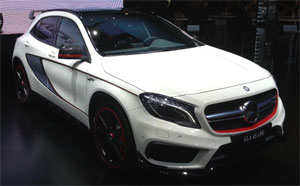 Building on rave reviews for the CLA45 AMG sedan, Mercedes-Benz applies a similar treatment to its smallest crossover with the GLA45 AMG. With 355 horsepower and a 0 to 60 of under 5 seconds, this is one fast people mover.

Not losing sight of its bread-and-butter, an all-new C-Class sedan also arrived. Mimicking the styling of the flagship S-Class, the larger “C” brings flowing lines and hunkered down attitude to Mercedes’ most popular model.

Now that BMW has re-aligned its numberings strategy, even for coupes and odd for sedan’s, they brought the new 2 Series Coupe to an auto show for the first time. Like the 1 Series before it, the compact “two” remains rear drive but adds more expressive styling. America gets two turbocharged models, the 245-horsepower 228i, and 326 horsepower M235i, the firm’s first M Performance model sold here

Two more traditional M-tuned cars arrived for Detroit, the M3 Sedan and M4 Coupe. Both sporting a 431-horsepower turbo straight six and all the track-ready M-hardware their tuner division is known for. 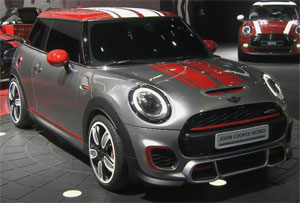 BMW’s Mini brand launched the third generation of the “new” Mini hardtop with a special John Cooper Works Concept. This “original” Mini, arriving in spring, is slightly larger with two engines, a new turbocharged 3-cylinder standard, and turbo-4 for the S model.

Giant Volkswagen looks ready to stick its tires in the sand with the Beetle Dune Concept. This crossover meets bug has added ground clearance and rugged interior fabrics. If this Dune “buggie” whets your appetite you just might be able to buy it in a year or two.

Audi made it official; the Q3 crossover is coming to America. Using the same structure as the Volkswagen Tiguan, it will do battle with the BMW X1 and Mercedes-Benz GLA when it arrives this fall.

This Audi Allroad Shooting Brake Concept is a little further into the future with its e-tron plugin hybrid powertrain and aggressive stance. The 2-door wagon’s size is very close to the current Audi TT coupe. Audi also showed a bolder A8 and S8. With more power, tech, and luxury, LED headlights are standard. 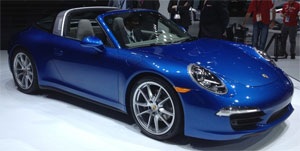 Porsche completed the rollout of the newest 911 with a Targa 4 and 4S. With its stainless steel Targa bar, a throwback sliding fabric roof panel, now automatic, that stows under a pivoting back glass, the Targas are for the first time exclusively all-wheel drive.

Finally, Volvo came to play in the all-wheel drive arena with the Concept XC Coupe. Its modern Scandinavian styling, and plug-in hybrid powertrain, may all translate into the next XC90 crossover.

Spectacular, is the only word left to sum up the 2014 North American International Auto Show. See ya here next year!