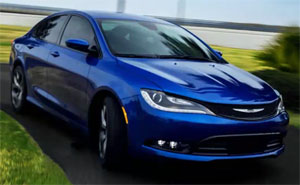 Our MotorWeek crew is busy putting together next week’s report on the 2014 North American International Auto Show. But, that doesn’t mean we can’t give you a sneak peek at some of the Motor City’s headliners.

The rebadged Chrysler 200 featured in the 2011 Super Bowl commercial signaled a rebirth for the Detroit automaker. Now, for 2015, there’s a redesigned 200 sedan that renews the product itself. Using an Alfa Romeo chassis, the mid-sized exterior is easy on the eyes, while the interior is roomy and luxurious.

Powertrains include I4 and V6, with a 9-speed automatic and 35 MPG fuel economy.

General Motors is making lots of news at Detroit, from the Corvette ZO6, to new mid-sized pickup trucks. The Chevrolet Colorado looks sporty, while the mechanically-similar GMC Canyon is more formal. Both offer 4 or 6-cylinder power with a diesel due for 2016.

Following on the success of the Cadillac ATS sedan comes this 2015 ATS Coupe. Smooth and purposeful, it retains all the handling prowess of the four-door.

On the global scene, Mercedes Benz brought their new C-Class to the show, with its progressive look, “S-Class level safety” and electronic aids.

And there’s so much more… From Ford’s new Mustang and F150 to a show-stopping Lexus. We’ll have it all for you soon, but that’ll do it for this week’s MotorNews.