The 2015 New York International Auto Show may signal both the end of winter and the end of the traditional show season. But, with a “boffo” number of debuts, clearly hope “springs” eternal in the auto industry.

It’s pedal to the metal time in the big apple, with every brand angling for a big moment in the spotlight. 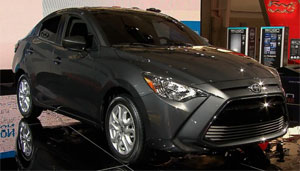 Breaking out of a new model drought, Scion kicked things off with not 1, but 2 world debuts. This bold iA sedan, sold as the Toyota Yaris in Canada, is clearly a departure for the youth brand best known for quirky/sporty hatchbacks …which Scion will continue to deliver, as this new iM 5-door indicates.

At Lexus, the all-new 4th generation RX continues the brand’s strides towards a more performance-oriented image. But, even with an NX-like frontend, and slick Murano-ish floating roofline, we think the mid-size RX will still delivery the brand’s tried-and-true luxury appeal.

Infiniti focused on the rapidly growing smaller crossover segment, with the world debut of a mildly redone compact QX50, and the first U.S. showing of the more radical sub-compact QX30 concept. 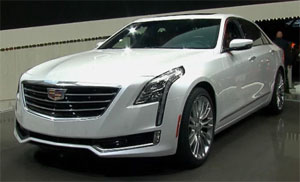 Luxury cars were big in New York, and we can’t wait to get behind the wheel of the rear-wheel-drive Cadillac CT6. Fresh from super bowl ads, the CT6 aims high, towards the BMW 7-series and Benz s-class, with sharpened brand styling and a technology rich interior. Under hood is a 3.0-liter twin-turbo v6.

But it was the rebounding Lincoln brand that made the flashiest big car news with the rebirth of their continental. This all-wheel drive concept, with its Bentley-like grille and profile, is slated for production in 2017 with Asian millionaires a target market.

Rolls-Royce has a little something special for the very well off too… …this special-edition wraith “inspired by film” celebrates the brand’s “and the world stood still” film, recently accepted into the British film institute national archive. 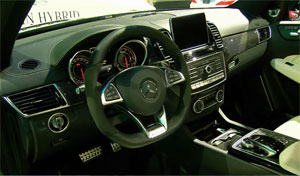 After unveiling the adventuresomely styled Mercedes-Benz GLE coupe in Detroit, we now see the more traditional family-truckster version, the GLE-class crossover. Replacing the mid-size ML, you don’t have to live in Malibu to appreciate this high riding, high-luxury ute.

Jaguar continues to reclaim their performance image by injecting more of it into this latest XF mid-size sedan. Riding on an all-new aluminum chassis this second gen XF comes fitted with standard supercharged v6 power.

And to keep some F-type excitement going, jag announced there will now be an R version for the convertible. Along with the coupe R, all-wheel drive will now be standard.

Over at Land Rover, there’s a new special vehicles operations unit, and they’ll be “poshing” things up to the limit with this SVAutobiography. 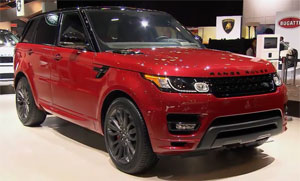 This toughened up Range Rover Sport HST Limited edition will certainly attract plenty of eyes whenever it ventures out. Styling is tweaked for the entire range rover sport line, and there’s now a new U.S. diesel option.

Speaking of utes in the U.S., the compact GMC terrain follows its chassis mate Chevy Equinox with a thorough refresh for 2016.

Chevrolet’s news was all about cars, starting with an all-new Malibu four-door. Coupe-like styling, a 300-lb. weight loss, a big gain in rear seat space, and a full-hybrid boasting 47 mpg, could finally make the Malibu a major mid-size sedan contender.

Chevy hopes to build on its unexpected success with the spark 5-door mini-car. The less tall second gen. Spark sports a larger 1.4-liter I4. 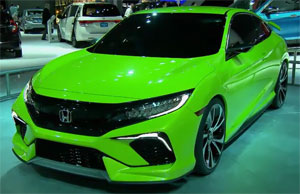 This coupe concept is a picture perfect peek at a new generation of Honda’s bread-and-butter Civic compact. A first time 5-door Civic will join 2 and 4-door models, with a 1.5-liter turbo 4 also new, augmented by a 2.0-liter turbo type R.

Among Kia’s string of successes is their mid-size Optima sedan. Now, there is an all-new gen 3 Optima with more size, refinement, technology, and even more engines, adding a 1.6-liter turbo 4.

Nissan was at New York with its latest “4-door sports car”, the all-new Maxima. Larger, with lots of Murano styling cues, this dynamic effort boast 300 horsepower. But, even with a sporty interior, Maxima remains front-drive with a CVT.

True sports car performance is behind the McLaren 570s. Their new “entry-level” sport series promises anything but entry-level prowess with a full carbon fiber chassis and gnarly mid-mounted twin-turbo v8. 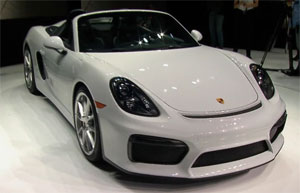 For purist drop-top sports car performance, Porsche signaled the return of the Boxster Spyder.  This top-level Boxster adds power and loses weight with no standard artificial air conditioning or radio.

BMW’s 6-series Gran coupe has recently been updated, so of course Alpina needed to do some tweaking of their own, with a new B6 xdrive Gran coupe. 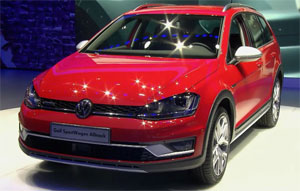 Volkswagen announced they’ll be adding all-wheel-drive to the Golf platform when this SportWagen Alltrack goes on sale here next year.

Could the long-awaited hot rod Subaru BRZ finally be a reality? Well sorry, not yet. But this STI performance concept from Subaru shows that something warm is in the works.

Finally, Mitsubishi celebrates its recent sales upswing with a freshened 2016 Outlander. With over 100 meaningful changes, I4 and v6 engines will eventually be joined by a plug-in hybrid.

From Broadway to your driveway, that’s what’s new from the 2015 New York international auto show.