With all the pre-show coverage online, you may think the art of the big deal auto show reveal is dying off. But fresh from our visit to Motor City, we saw plenty we weren’t expecting at the 2015 North American International Auto Show. So let’s get to it!

After five straight years of up car sales, the mood inside Detroit’s Cobo Hall was also upbeat with anticipation of both another great year and an even better auto show.

And, Chevrolet didn’t disappoint with two electrifying high notes. First, a more boldly redesigned Volt plug-in hybrid. With higher capacity batteries and more powerful 1.5-liter I4 gas generator, Volt’s all electric range grows to 50 miles, with a total range of over 400 miles. Interior controls have been simplified and the back seat expanded with three seat belts. 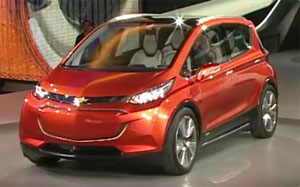 But it was Chevy’s second electric surprise that really got this party charged up. The Bolt EV concept. This 5-door promises family car room, a 200 mile range, and a price after tax credits of $30,000. Production could begin in 2017.

While Chevy sees a “Green” future, Ford sees it as “Red Hot!” They revealed a trio of high performance showboats: an aluminum Ford F-150 Raptor with high output EcoBoost V6 and 10-speed transmission. The near track ready Ford Shelby GT350R Mustang with flat-crank 5.2-liter V8 and carbon fiber wheels. And, saving the hottest for last, an all-new Ford GT supercar.

The Ford GT is also honed for racing with a down force, carbon fiber rich body, a 600+ horsepower twin-turbo V6, ceramic brakes, dual-clutch tranny, and an attitude that clearly was born to win. Indeed the GT arrives next year to celebrate the 50th anniversary of the Blue Ovals first victory at LeMans.

Ford also bolstered its premium Lincoln division with a new MKX middle-weight utility. Styling is more refined with LED headlights; the luxury quotient is also higher with as much technology as any rival. With both a 3.7-liter V6, and 2.7-liter EcoBoost six, MKX is another step in Lincoln’s path back to relevance. 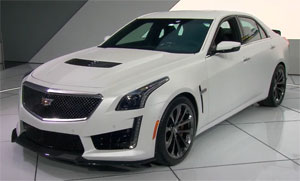 One of the worst kept secrets was the Detroit unveiling of the long awaited Cadillac CTS-V. With a 640-horsepower supercharged V8 from the Corvette Z06, the CTS-V looks fit to take on the world’s best super tuned four-doors.

GM’s premium division, Buick, let its hair, or should we say top down with the new Cascada Convertible. This Opel import is Buick’s first drop top in 25 years powered by a 200-horse turbocharged four.

But, Buick’s real surprise was the Avenir concept. A large, long, low and luscious four-door that could foretell the brand’s new global flagship.

Over at Chrysler, or as it is now known, FCA US, it was Ram who stirred up the most attention with the Rebel! More of a light duty off-road package than a true rival to Ford’s Raptor, the Rebel’s blacked out, raised stature is highlighted by a decidedly un-Ram grille, with either V6 or HEMI V8 power behind.

While this is Detroit’s big show, the 2015 North American International Auto Show made plenty of global car news as well. 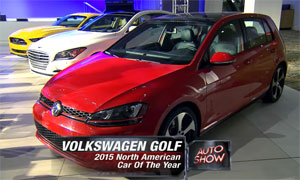 Import brands made lots of Motown news this year, and much of it about trucks!

Toyota, long the leader in small pickups, reinforced that status with a new-generation Tacoma. Still made in the U.S.A., the Tacoma dons a more sporting look and new features like an easy lower tailgate and Blind Spot Monitoring. With a carryover four, and new port/direct injected V6 engine, it should easily keep Tacoma king of its jungle.

Nissan, on the other hand, took the full-size pickup route with an all-new Titan. The Titan XD model joins Ram in offering a light duty diesel option. In Titan, a new Cummins 5.0-liter turbo V8.

Hyundai surprised both truck and car fans with its diesel powered Santa Cruz Crossover Truck Concept. This unibody hauler has four doors for easy access to the rear seat, and a novel extendable tailgate for long loads.

Hyundai also showed two new Sonata Hybrids. Both use a smaller gas engine with a more powerful electric drive. The Plug-in, Hyundai’s first, has an EV range of 22 miles.

Honda’s FCV concept shows just how dramatic a hydrogen fuel-cell car can be.

While, a gasoline-electric hybrid of a very different sort is Acura’s all-new NSX sports car that will finally go on sale here this year. This mid-engined, twin-turbo V6 exotic will use front and rear battery power for an EV-only “Quiet” Mode. But with its aluminum and carbon-fiber design, we think the NSX will mostly be screaming off showroom floors.

Another mid-engine sports that made news in Detroit was the Alfa Romeo 4C Spider. With both carbon fiber and cloth roof panels, this targa 4C is ready to let fun in the sun begin. 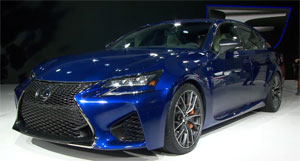 Nissan’s Infiniti brand arrived with a performance story too, with the Q60 Concept coupe. It will use a modified Q50 sedan chassis with both rear and all-wheel drive when it arrives for real this summer.

An all-wheel drive crossover is in Jaguar’s future, as they announced that last year’s C-X17 concept will be next year’s F-Pace, the brand’s first utility. Power choices may include a diesel.

This “family sports car” will share its chassis with the new XE compact sport sedan. 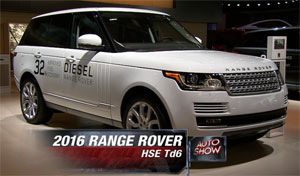 Mercedes arrived with a new swooped roof crossover utility, the GLE Coupe. What once would have been part of a new M-Class family, the Alabama made five-door will initially come in 450 AMG, and all out GLE63 S trim.

Detroit got its first look at the successor to the AMG SLS sports car; the new non-gull wing Mercedes-AMG GT S.

This Mercedes-Benz C450 AMG 4Matic bridges the gap between a regular “C” and a full-tilt AMG version. While, another new “C” of note is this C350 Plug-In Hybrid. Mercedes says it will have an EV-only range of about 20 miles.

And, Mercedes also brought their self-driving concept to Detroit, complete with its lounge-style seating. 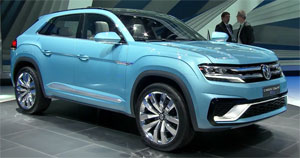 BMW has tinkered with its high dollar 6-Series and the resulting cars are more appealing than ever. With traditional two-door, convertible, and four-door Gran Coupe they all look desirable, especially in M6 trim.

This robust looking Cross Coupe GTE plug-in hybrid concept may signal that Volkswagen is finally ready to build a Passat-size family crossover in America. While no third row seat was evident here, remember this is still a concept. 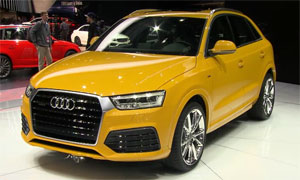 Audi used Detroit to showcase its new SUVs. With an all-new chassis and body the 7-seat Q7 sheds over 700 pounds but adds a more station wagon-like in appearance. Audi’s Q3 greeted us with a facelift, 10 more horsepower, and a host of other changes.

And, this Porsche Cayenne Turbo S, their new “top dog” in performance SUVs with a reworked 4.8-liter, 570-horsepower twin-turbo V8.

Volvo is tweaking their S60 four-door two ways. This S60 Cross Country brings their raised, all-road wagon look to a sedan. While this stretched, Volvo S60 Inscription adds nearly 3 ½ inches of rear legroom for near limo-like appeal. It will also be the first Chinese made car sold in America.

So it was a full throttle time enjoyed by all at the 2015 North American International Auto Show.