The temperature is heading low, low, low…so, it must be January! But, that actually pushes our spirits high, for it’s also time for Detroit’s 2016 North American International Auto Show. So let’s grab a firsthand look at all of this year’s headliners from the motor city!

2015 was a very good year for automakers with an all time U.S. sales record, and they came prepared for more heydays ahead. Starting with plenty of new toys and tools from the Detroit-3 to keep the good times rolling. 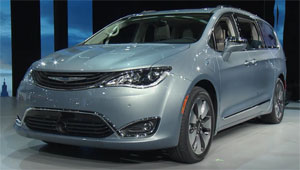 A new minivan might not seem like earth shaking news, but when it comes to family tools it can’t be beat. And, FCA has thoroughly retooled its minivan, from platform to name. So, it’s out with the Town and Country and in with the 2017 Pacifica. Shapely, with a 200-like front end, updated Pentastar V6 power, 360-degree cameras, better Stow-n-Go seating, as well as hands free opening for rear hatch and side sliders. Plus, a full-Hybrid with 30-mile EV range is now part of the lineup. Chrysler hopes you’ll be saying “goodbye crossover, hello minivan!”.

With all of the “Since 1941” logos on Jeeps in recent years, we saw this one coming, as FCA celebrates the brand’s 75th anniversary with special editions across the lineup.

Less than a year after it debuted as a concept, the production Lincoln Continental arrives for real. Well executed outside and in, with standard all-wheel-drive and a new EcoBoost V6, it could be just what the long struggling brand needs to get back in the luxury car game.

Car things were quieter over at the Blue Oval brand where Ford unveiled a face-lift for their mid-size Fusion sedan... 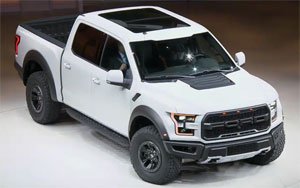 ...saving the flash for its upcoming Raptor pickup, now in new crew-cab as well as extended cab form. Both boast twin-turbo V6, 10-speed transmission, and more off road attitude than ever.

Over at the Bow-tie booth, Chevrolet’s big news was small. A Euro-styled hatchback version of their 2017 Cruze compact...

...along with the production version of the Chevy Bolt EV, after its official unveil the week prior at the Consumer Electronics Show. So far, GM is holding steady on the $30,000 price point; now all that remains, is to see if it lives up to the 200-mile plus range claims.

The biggest GM delight at Detroit was, for the second year in a row, from the once over-the-hill Buick brand. The bold and gorgeous Avista concept coupe may share the Camaro’s proportions, but if it ever reaches showrooms it would be the performance luxury halo model the brand needs for a full comeback.

Definitely destined to fill out their lineup is this two-row Buick Envision crossover. This mid-sizer will be the first “Made In China” model for a Detroit automaker, and the timing couldn’t be better. 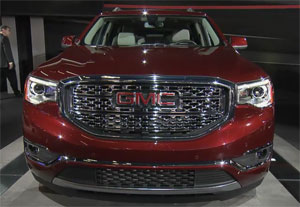 Speaking of timing, the long overdue 2nd generation GMC Acadia three row crossover is here. Surprisingly, in a bigger is better world, the still profession grade looking Acadia actually loses both size and weight to better compete with the likes of the Honda Pilot and Toyota Highlander.

But, that just cap’s off the “domestic” brand side of things as we’ll widen to a global view when we return later in this show with more from the 2016 North American International Auto Show.

Setting the stage for Volvo’s first public showing of the even more impressive S90 range-topping sedan. While clearly sharing much with the XC90, it not only looks astonishing, but it drives even further into the future with some of the most advanced self-driving aids yet.

Toyota turned their Detroit stage over to luxury division Lexus and boy did they produce a show stopper. This is the Lexus LC500, a performance serious, full-size, and also full-luxury, 5.0-liter V8 GT Coupe, that is expected to deliver LFA supercar level performance at a lower, but perhaps still 6-figure price. 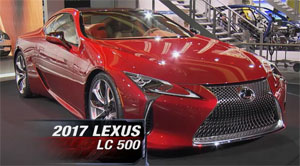 Indeed, performance coupes were back in vogue at Detroit as rival Infiniti unleashed its new Q60. Looking even sharper than last year’s concept, this 2-door derivative of the Q50 sport sedan boasts both 300 and 400 horsepower versions of a new twin-turbo V6, as well as a Mercedes-built 2.0-liter turbo.

It’s all about pickups over at Nissan with this TITAN Warrior off-road concept. This jacked up diesel rig rides on 37s, looking ready now to duke it out with Raptor for king of the dirt.

Although Honda ditched its oddly styled Ridgeline pickup after 2014, it didn’t stay gone for long. This 2017 Ridgeline is all-new, and dressed in more traditional crewcab pickup clothes. Two way tailgate and lockable underfloor storage return, but it is now the only mid-size pickup with 48-inches between the wheel well arches.

Across the aisle, Acura unwrapped this Precision Concept sedan. Bolder and striking from every angle, look for this dynamic new styling to adorn showroom models soon.

Though BMW had already released plenty of photos, this was our first chance to see the new M2 in person. The M4’s little brother will deliver 365-horsepower and easier entry into M-sanity... 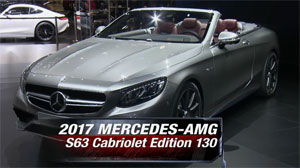 Mercedes-Benz takes their mid-size E-class sedan to new levels of both technology and luxury...

...while relaunching the SLK drop top as the SLC…

...and expanding the AMG profile with this V12 Mercedes-AMG S65 Cabriolet…

But the high performance ride that we’re all looking forward to the most, comes from Porsche; with the new 911 Turbo.  Yes, we know all 911s are now turbos, but the one with Turbo in the name is an extra 540-horsepower worth of special.

We weren’t expecting to see this all-new A4 Allroad at the show; but here it is! As the only way we’ll see the wagon model of their 9th generation A4 compact sedan, this Allroad packs more of everything you buy an Audi for.

Audi also gave us a hint at both future crossovers for the brand and perhaps future fuels as well, with this hydrogen EV h-Tron quattro concept.

Just before the show, Hyundai announced that their Genesis nameplate would finally be spun off into a standalone luxury brand, and this all-new G90 looks like a great choice to get things rolling.  More or less replacing the Equus, the S-Class sized G90 will go on sale before year’s end.

While Kia is looking out for the rest of us, with freshened four and five door Forte compacts… 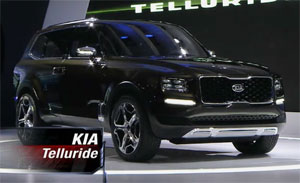 ...it was this Sorento-eclipsing Telluride large SUV concept that got our attention. This three-row, full-size design study is likely to morph into a true Borrego successor very soon.

And finally, at the other end of the tape measure, Smart’s new generation of its tiny, sliding roof Fourtwo Cabriolet.

And with that, we wrap up our coverage, large and small, from Detroit and the 2016 North American International Auto Show.