Spring time means many things to many people; but for us it means only one thing, it’s time for the New York International Auto Show.  And while some would rather be outside enjoying the warmer weather and blooming flowers; we’re just fine being inside, breathing in the fumes of automotive excitement. So come along for a joy ride in the big apple.

Indeed, there was plenty hot new car goings on under the lights at NYC’s Javitz Center. 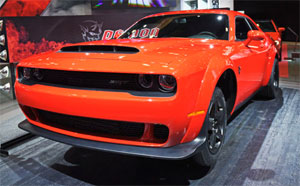 And none hotter than the Dodge Challenger SRT Demon. No secret heading into the show, but we sure were excited to see it in sheet metal.  We’re kind of into 840-horsepower brutes built for drag strip dominance.

Longing for an off-road version of the Dodge Charger Hellcat? Well now there is one...kinda. Jeep cranks up the performance of the Grand Cherokee with this 707-horsepower Trackhawk.

Cranking up the posh is the mid-size Range Rover Velar, making its Big Apple debut.

After announcing a posher sub-brand Avenir last fall, we finally see proof of that in the all-new Buick Enclave Avenir three-row crossover.

We also knew a new Buick Regal was headed our way. The fact that it will only be available as a hatchback and wagon however, we did not know until now. 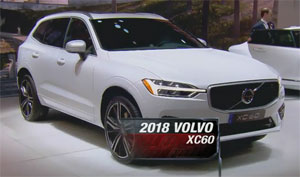 Volvo brought its new mid-size square back to New York; the XC60 crossover is sure to be a big hit here.

Ford put new meaning into the phrase “protect and serve” with this Police Responder Hybrid Sedan.

A bit less “arresting”, but having a much bigger impact will be this facelift 20-18 Ford Explorer.

For ultimate American luxury, look no further the new Lincoln Navigator; it’s lighter, more powerful, and quieter than ever.

With the new Honda Odyssey and Chrysler Pacifica in its sights, Toyota updates their Sienna minivan. 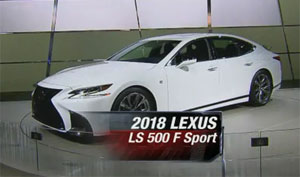 And they also unveiled yet another reimaging of the legendary FJ, but unlike the FJ Cruiser, this FT-4X was designed more for hip urbanites than rock-crawling trail hounds.

From their luxury Lexus division, it is an F Sport version of their flagship LS500 sedan.

Dog lovers will surely be conquered by the pet friendly features of this Rogue Dogue concept. Bow Wow indeed!

This was also the official unveiling of Nissan’s GT-R Track Edition. It looks almost as good sitting here as it did ripping around our track.

Nissan’s colorful 370Z Heritage Edition showcases changes coming to all 370Zs for ‘18. On Nissan’s upscale side this Infiniti QX80 Monograph shows what direction the brand’s biggest SUV is headed. 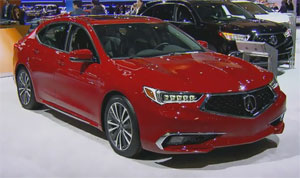 Acura breathed some new life into their midsize TLX luxury performance sedan, with a welcomed new look outside, more premium features inside, and a new A-Spec performance version.

Honda’s Clarity lineup grows to three with the Fuel Cell model being joined by a Plug-In Hybrid, and Honda’s first full EV, the Clarity Electric.

Honda also debuted the Civic Si Sedan and Coupe, the first Civics to use a new 205 horsepower 1.5-liter 4.

Subaru continues to trot out 3-row SUV concepts, but this Ascent looks just about ready for prime time. While, on the wagon side, the Outback gets a little freshening for ‘18.

To help bolster sedan sales, the Hyundai Sonata gets a thorough update including new sheet metal and an 8-speed automatic.

Hyundai’s luxury label Genesis will get an SUV soon, though it won’t be powered by a fuel cell like this GV80 Concept. 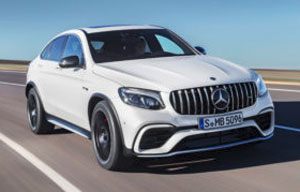 Mercedes-AMG brought the power with some GLC63s, in in both traditional SUV and Coupe forms.

Audi unleashed a trio of performers: a meaner, 400-horsepower Audi TT RS, that same 5-cylinder in a new to America Audi RS 3, and up one size, 444-horsepower, now V6 powered Audi RS 5. 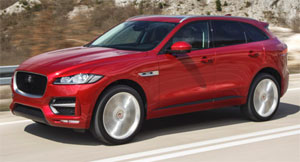 Jaguar also won big at the World Car Awards Breakfast, taking home two, including the top World Car of the Year honor for the F-Pace. We asked host of NHK’s Samurai Wheels, and World Car Chairman Peter Lyon, what made it such a hit with jurors?

SOT: PETER LYON “well I think overall it’s the first crossover the first SUV that Jaguar’s built that really impressed the jury.  I think also the design.  It’s a really good looking SUV. It’s got some wonderful engines and gearboxes in it.  Drivers well, it’s very plush inside and it looks good in your driveway as well.”

JOHN DAVIS: It was a whirlwind auto show for sure, so we’ll wrap up our coverage of the 2017 New York International Auto Show!