There may be frigid temperatures outside, but inside Detroit’s Cobo Hall, things couldn’t be hotter. That’s right, it’s that time of year again, for you to come along with us to Detroit, for a Motorweek tour of all that is shiny and new at the 2017 North American International Auto Show.

Early in the AM of the first press day always kicks off with the announcement of some of the industry’s most coveted awards of the new year.

LAUREN FIX:“And the winner is the Chevrolet Bolt EV.” 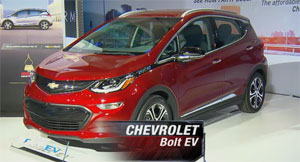 A runaway winner, the Chevrolet Bolt EV is the first all-electric car under $30,000 with over 200 miles of range, and room enough for a growing family and all their gear. Kudos to GM for reaching that milestone before anyone else!

North American Truck of the Year goes to the Honda Ridgeline. It still may not fit everyone’s definition of a real truck, but this 2nd gen Ridgeline is a lot more truck-like than it was before; and more “truck” than most personal-use buyers will ever need.

And, for the first time, a North American Utility Vehicle of the Year was crowned, and it’s not a SUV; rather the Chrysler Pacifica, America’s first minivan reimagined for a new millennium of buyers.

As for debuts from the hometown teams, Chevrolet got the ball rolling with an all-new Traverse three-row crossover. Undoubtedly more brawny and upscale in appearance, looking much more like a Tahoe/Suburban than the previous bulbous CUV. It will have first time turbo-4 as well as V6 power along with GM’s new 9-speed automatic transmission. Highway MPG jumps from 22 to 25. A much needed and timely arrival, with 2 inches more wheelbase, it’s thus overall longer than its kin the GMC Acadia. With that, Chevy claims cargo space and 3rd row adult-size legroom will be best-in-class. 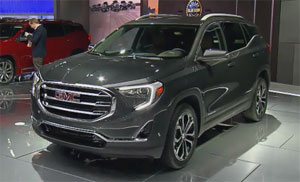 Speaking of GMC, they unveiled an all-new Terrain two-row crossover. While still a platform mate of the Chevrolet Equinox, the new Terrain looks totally different inside and out while being little tidier in both size and weight. It also gets new turbo engines and the 9-speed automatic, but goes one further with a 1.6-liter turbo-diesel option. It’s new look is sleeker yet still quite rugged; and there’s even a floating rear roof design that everybody seems to want these days. And don’t worry high rollers, a Denali version will be available as well.

It’s always about the F-150 over at Ford, and for ‘18 it looks like their aluminized best-seller will be getting a revised face as well as some optional diesel power of its own, an all-new Ford-designed 3.0-liter Power Stroke V6. Base engine goes from 3.5-liter V6 gas to a new 3.3-liter, there’s a new 2.7-liter EcoBoost V6, and even the 5.0-liter V8 gets revised.  It also sports Ford’s new 10-speed automatic transmission.

Ford also confirmed a mid-size Ranger pickup will return in ‘19, followed shortly thereafter by a new Bronco in ‘20. Both vehicles will be assembled in Michigan.

Then, in a surprise twist, after most of the global press went home, Ford announced a refreshed 2018 Mustang with a lower more aggressive nose the new 10-speed auto, but without a V-6 option.

Fiat Chrysler America showed their biggest news at the Consumer Electronics Show earlier in the month, but made sure the Detroit press also got up close and personal with this concept Portal. It’s a way-out, connected vision of what a minivanish self-driving EV people mover might look like.

On the production front, a few extra touches of darkness are being added to the Ram 1500, with the Rebel Black.

While the folks at Jeep announced that a Wagoneer SUV and Wrangler-based pickup are finally on their way. And that surprisingly wraps up our coverage of Big-3 debuts for this year.

But European and Asian import brands easily took up the slack, so stay tuned for more from the 2017 North American International Auto Show.

Crowds of out-of-towners always motor their way to the Motor City in January, and this year there were exciting debuts from a long list of European and Asian brands. 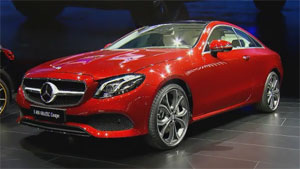 Starting, actually, the night before press days for Mercedes-Benz, with a coming-out party for the refreshed GLA lineup. Both the GLA250 and high performance AMG GLA45 were on display with the latter sporting a 375-horsepower turbo-4.

This show was our first chance to see the all-new Mercedes-Benz E-class Coupe in person. A wall flower no more, it delivers a lot of the S-Class Coupe’s looks and appeal.

And, to celebrated 50 years of AMG, both a refreshed Mercedes-AMG GT C Coupe and GT S arrived Detroit-side.

Previewing an almost brutish new face for Audi, this Q8 full-size crossover is just a concept for now, but we’ll likely be driving something that looks a lot like it within a year.

But, even sooner we’ll get behind the wheel of this high performance 2nd-generation SQ5 midsize crossover. And, Audi always seems to have something new for sun seekers, and this year it is the all-new A5 and S5 Cabriolets. 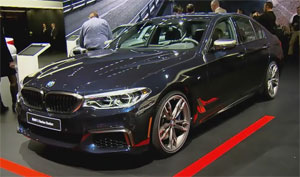 BMW may have just taken the wraps off this all-new 5 Series, but we won’t have to wait long to drive it, as it will be in dealerships next month. Weight is down, performance is up, and there’s even a plug-in iPerformance version.

For more traditional performance this BMW M760 is the first 7 Series to get the M Performance treatment.

Detroit was the place for all-new debuts of two best-selling models, starting with America’s best selling car, the Toyota Camry.

Toyota is out to counter a sedan sales decline with the edgiest Camrys ever. Highly sculpted, front facias that go from mildly aggressive on the Camry Hybrid, to sharply in your face for this sportiest XSE.

The available two-tone roof works well in visually lowering the profile. But, power remains totally traditional with a 2.5-liter I4 and a 3.5-liter V6. 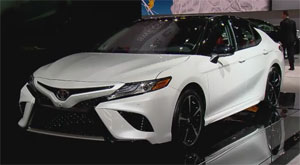 America’s bestselling minivan doesn’t look all-that new, yet the 20-18 Honda Odyssey is loaded with lots of advanced safety, convenience, and technology. You know, stuff that’s actually important to parents, like in-cabin cameras to monitor rear goings-on, an intercom that works with or without headsets, as well as highly configurable Magic Slide seating. By the way, fuel-saving 9- and 10-speed automatics are added to a more powerful 3.5-liter V6 as well.

Nissan also wants to bolster sedan sales and is looking at this stunning Vmotion 2.0 concept as a possible way forward for Altima.

Pre-show rumors that Nissan would finally bring their Qashqai small crossover stateside were right. Only it will be known as the Rogue Sport here in the U.S. It slots between the just-new Rogue and aging Juke.

If you’re talking about exciting Subarus, well it can only mean one thing, the WRX. And for 20-18 there is a mid-cycle mostly visual refresh for both regular-strength WRX, and extra-strength WRX STI. 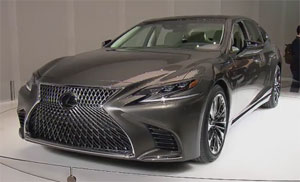 It may look like a concept but this 5-generation Lexus LS500 is for real. With sensuous coupe-like lines flowing from a massive spindle grille, the car that started it all for Lexus shoots into the future with rear and all-wheel drive and a 415-horsepower twin-turbo V6, plus all the tech and luxury expected in a top drawer flagship.

This mid-size Infiniti QX50 Concept is a thinly veiled look at the last of the brand’s utilities to get updated styling. But, it will be the first to add Infiniti’s variable compression turbocharged engine technology.

Kia continues to raise expectations and image of their brand, this time with a rear-drive sport sedan, the Stinger. Not just a concept anymore, this baby will go on sale this fall.

While other brand’s crossover offerings may be slimming down, Volkswagen gave their new compact Tiguan the opposite treatment; adding 10-inches of length and an optional 3rd-row. 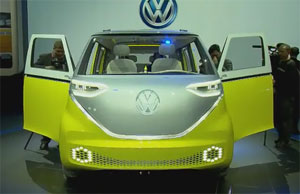 But it’s this Microbus-inspired I.D. BUZZ Concept that did indeed create quite a buzz. With a 270-mile range and all-wheel drive, it embodies VW’s strong commitment to future EVs.

And finally, it wouldn’t be the Detroit show without a Chinese automaker saying they will soon enter the U.S. market. This year it’s GAC, with a trio of cars to show, including the all-electric GE3.

So, with signs of even more pressure from imported brands, we’ll wrap up our coverage of the 2017 North American International Auto Show.