For most people, Detroit, Michigan in the dead of winter, would be the last place they’d want to go. But, we’re not most people. we are fanatics of all things automotive. And everyone knows, come January, Motown is the place to be for the scoop on the hottest of the new cars heading our way. Don’t want to go out in the cold? Don’t worry; sit back and relax, ‘cause’ we got you covered!

This year the car honor goes to the Honda Accord for going well above and beyond what a family four-door should be. 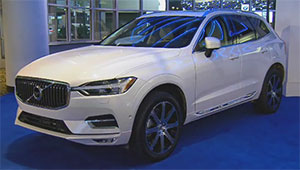 Utility of the Year goes to the handsome Volvo XC60. Following in the tire treads of it’s bigger XC90 kin, it’s the new definition of the modern crossover ute.

And, with only one actual pickup nominee, this year’s Truck of the Year honor goes to the ultraluxurious, truck-frame like, Lincoln Navigator SUV.

Indeed, the vast majority of the news at Detroit was about trucks. Chevrolet teased their new Silverado 1500 down at the Texas Motor Speedway last month, but Detroit filled in all the details. The most new Chevy full-size truck in decades, it claims increased capabilities, user friendliness, and efficiency. Weight is down 450 pounds with both aluminum and steel in a body filled with aerodynamic tricks like front tire wheel well air ducts. An inline-6 turbo-diesel is new, along with a novel cargo box design that adds 7-inches of width inside without adding any girth outside. Car-like tech features abound, including the first ever powered tailgate. 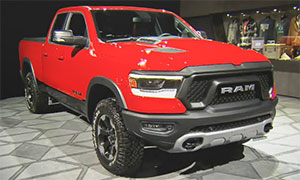 Not to be outdone, FCA arrived with an all-new Ram 1500. Of course it’s more powerful, more capable, and more efficient with over 200-lbs less to haul around. But, with its coil and air spring rear suspension, there’s a softer side as well, as the interior is even-posher with a tall Tesla-style navscreen option.

Also shown was a new Ram Rebel. Far more serious than before, it looks to be a lot closer to the Ford Raptor in terms of off road performance.

At Jeep, no new pickup yet, but they are trying to re-establish some cred for the Cherokee ute. It adds a more traditional face, a new turbo-4 engine, enhanced 4X4 systems with Selec-Terrain traction control, more usable cargo space, and even a hands-free power lift gate.

And, finally, making it truly the year of the truck, comes the long awaited return to America of the Ford Ranger pickup. Now mid-size in extended and crew cab forms, initial power comes from an updated Mustang 2.3-liter EcoBoost I4. Still, Ford assures us the Michigan-built Ranger will have plenty of capability to keep up with the once again crowded midsize truck field. As for the Ranger based Bronco? Well, stay tuned.

And, in another move that was a long time coming, Ford finally shoves some Power Stroke muscle into the F-150. The scaled down 3.0-liter V6 version delivers 440 lb.-ft. of torque; but more importantly, achieves 30 miles-per-gallon. 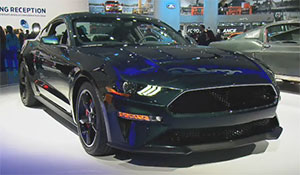 Fittingly, on the 50th anniversary of the movie Bullitt, comes another Ford Mustang Bullitt. This GTbased ‘stang has all the right cues and will be available this summer. Too bad the “King of Cool” is not around to once again slide this one around the streets of San Francisco.

Ford also confirmed that a new Shelby GT500 is on the way. With over 700-horsepower it will be the most powerful production Ford yet.

But that’s not all of Ford’s future performance, they also confirmed a high output electric SUV, though we we’re not thrilled about using the fabled Mach 1 name. Real time SUV performance will come from the Ford Edge ST, which replaces the previous Edge Sport, and joins an updated midsize crossover lineup for ‘19.

That wraps up our look at the Detroit crowd’s intros at the 2018 North American International Auto Show. But, later in the show we’ll see all the import brand’s show and tell. 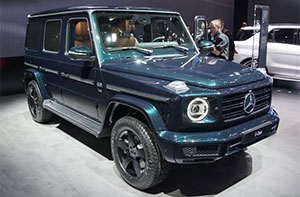 JOHN DAVIS: As promised, it’s time to head back to Detroit for a look at what’s coming from import brands to sweeten our car-loving lives!

Starting off our look at import brand news from Cobo Hall is the coolest of the rugged cool, and it doesn’t happen very often, an all-new Mercedes-Benz G-class. Yes it still pretty much looks like two boxes welded together, but it’s been somewhat modernized outside and totally revamped inside including a wide screen digital dash.

Benz also brought to Motown a major expansion in the Mercedes-AMG lineup with a new 3.0-liter inline gas-engine that gets an EQ Boost from a new 48-volt electrical system; beautifully wrapped here in the CLS53 sedan……as well as in the E53 Coupe...and the E53 Cabriolet.

Rival BMW brought their new subcompact X2 to Detroit. Logic might tell you it’s a coupe-ish version of the X1 crossover that we love so much, and you’d be close. While still sharing a chassis with the Mini, it is indeed lower, shorter, and sportier than the X1, with a 228-horsepower 2.0-liter turbo the sole power for now.

For the EV performance-minded, an updated BMW i8 Coupe and new i8 Roadster made the trip east from their LA debuts last fall. 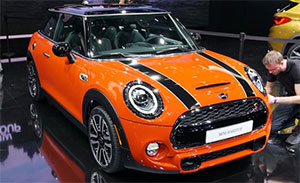 BMW also showcased updates to the Mini Cooper hardtop and convertible, including Union Jack patterned tail lights. Gimmicky? Sure, but that’s Mini. Anything for fun.

Making its U.S. debut, the Lamborghini Urus speaks volumes about the rising global tide of SUVs. Their first such effort since the military-style LM 002 of the 1980s, the Urus backs its exclusivity with twin-turbo V8 power and styling that truly is a work of Italian art.

This was also our first look at the new Audi A7, making its North American debut in Detroit. This 5-door sport back looks as beautiful as always both inside and out.

Volkswagen most popular American model gets a total remake in this all-new Jetta compact. More stylish outside, as well as less conservative inside, the new Jetta is available with a first time digital dash. A manual-geared 1.4-liter turbo continues as standard, while a new 8-speed automatic with auto stop/start is optional.

Volkswagen will also be bringing a bit more visual and actual performance to the Passat, with a new V6 powered Passat GT.

No secret to what this great looking concept is all about. The Infiniti Q Inspiration, complete with its nearly all glass roof and variable displacement engine, is an intriguing preview of their forthcoming flagship sedan.

Across the aisle at Nissan, was this XMotion [CROSS-MOTION] concept; which takes styling cues from Nissan’s Xterra past and pushes them forward towards what could be a new more rugged Rogue.

There seems to be no limit to Lexus design; so from the people that brought us the fabulous LC500 Coupe, comes the LF-1 Limitless, predicting a no holds barred ultra-luxury flagship crossover.

Over at Acura, a production-ready prototype of the next RDX crossover was shown. It looks way more dynamic, and Acura promises it will be; aided by a new 2.0-liter turbo-4 engine and 10-speed automatic transmission.

Bigger news for Acura performance faithful is the return of Type S badge, as well as expansion of the A-Spec throughout the lineup, including the new RDX. A potent V6 turbo is also in the works. 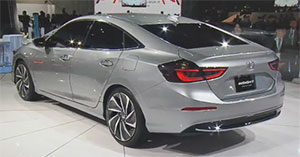 After sitting out for 5-years, Honda’s Insight is back in the hybrid game. Honda predicts at least 50 MPG rating for this bigger, more traditional looking 2-motor Civic-based compact sedan.

If big-sedan comfort is what you’re after, Toyota has an all-new Avalon lineup, complete with Hybrid. Look for this piece of attainable premium, at a gated community near you.

This reborn Hyundai Veloster may look a little tamer than the original, but Hyundai has packed in plenty enough performance to make up the difference; launching a new N performance lineup. And don’t worry, the 3-door treatment is still its signature.

Partner Kia is looking to further their recent winning ways with an all-new Forte compact; with more room, style, and sophistication than ever before. 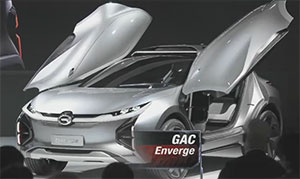 And, then there is GAC. Never heard of them? Well you will as this high end Chinese manufacturer announced plans to start selling here next year with this GS8 midsize utility. But, their display of the GA4 flagship sedan, and the butterfly door, Enverge EV concept, makes it clear they aim to be an aspirational brand.

So there you have it, the 2018 North American International Auto Show. And, now that we’ve seen all of these rides, we look forward to actually putting your eyes into the driver’s seat, here on MotorWeek.