Electric cars have quickly gone from a distant future idea to dominating today’s headlines. As seen at the 2019 Frankfurt Motor Show.

With its first public showing, the all-electric Porsche Taycan sedan took a starring role at Frankfurt. It an EV rocket with up to 750-horsepower.

Porsche held on to the spotlight with the 911 Carrera 4 Coupe and 911 Carrera 4 Cabriolet. As for their SUV’s, three new hybrid models join the Cayenne series,…and the Macan Turbo took a bow. 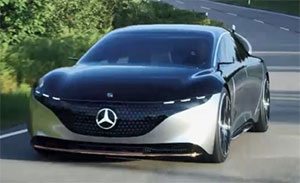 Mercedes-Benz got our attention with the dramatic Vision EQS concept, showing how the electrified EQ sub-brand might evolve.

Along with expanding their small plug-in hybrid offerings, the brand showed extra fastback style in the Mercedes-Benz GLE Coupe, and more potent 435 hp Mercedes-AMG GLE 53 4MATIC+ Coupe. The AMG treatment is also due for their newest small SUV… as the Mercedes-AMG GLB35 4MATIC.

We’re told this sleek but polerizing BMW Concept 4 Coupe is very close to the next 4 Series design. An updated BMW X6 also had its first public outing… 12 years after being introduced in Frankfurt. 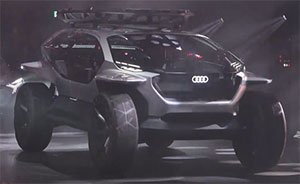 The new Land Rover Defender made a dramatic entrance descending a 42-degree incline. And, it’s due to descend back to America too. 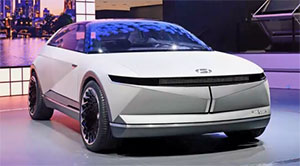 Hyundai’s view includes plugging in with the EV Concept 45…. and their first electric racing car… the Veloster N ETCR.

At Frankfurt 2019, our electric future was clearly on the fast track. And, that’s it for this week’s Motor News.