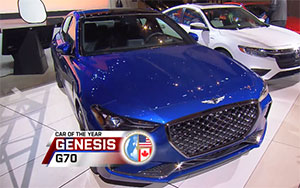 The North American International Auto Show is always a special event for us here at Motorweek. But this year’s Detroit festivities are even more noteworthy, as this is the last time the show will be held in usually frigid January. It migrates to a warmer June time frame next year. But, before we get all nostalgic, let's see all of 20-19’s big reveals!

While most European automakers didn’t make the Detroit stop this year. The majority of domestic and import brands arrived at the 2019 North American International Auto Show with an extensive stream of all-new models that we just can’t wait to drive.

…and the Hyundai Kona, including the Kona EV, for Utility of the Year. 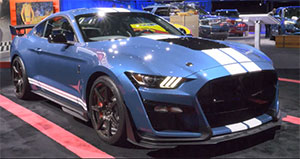 It was the Ford stand that really get our adrenaline pumping. As if descending from performance-car heaven…the all-new Mustang Shelby GT500. 700+ horsepower from a 5.2–liter supercharged V8 mated to a 7-speed DCT; no manual for now! While that may be heresy, with a 0-60 in the low 3s, this Shelby is going to kick some serious butt on the drag strip, along with road course dominance thanks to a magnetic suspension, loads of rubber crammed into the wheel wells, and Brembo brakes.  Carroll Shelby would definitely approve!

Ford had one for the family street scene as well…the all-new, three-row, 2020 Explorer SUV. Sharing the Lincoln Aviator’s chassis, it returns to a rear-wheel-drive architecture for better towing, with all-wheel-drive an option.

Targeting a wide swath of buyers, the all-new Explorer will be available as a Hybrid, as a high-performance 400 horsepower ST, and even as a Police Interceptor Utility. 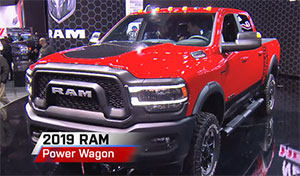 The big news at Fiat-Chrysler, was big trucks, with an all-new Ram Heavy Duty. Yes, it does have 1,000 lb-ft. of torque, with its available high output 6.7-liter I6 Cummins Diesel; and double-yes, it will out-power, out-tow…35,000 pounds worth…and out-haul all other pickups. The Ram Power Wagon returns too, here with an updated 6.4-liter HEMI gas V8.

Debuts from imports start with a car…the new Volkswagen Passat.  Most of its Tennessee-built underpinnings and drive gear remain the same, but the sleek new sheet-metal is a major departure, and we like where it’s headed.

Perhaps even bigger news, was Volkswagen’s announcement of major expansion of the Chattanooga plant for upcoming EV models. With VW’s new Ford technology alliance, we might even see some future Blue Oval EVs made there.

Toyota officially unveiled the worst kept secret in car-dom, the all-new Supra, the first production car developed by Toyota’s GAZOO racing team. There’s still an inline-6 under the hood, only now it comes from Bavaria, as Supra shares a lot of its engineering with the BMW Z4.  That turbocharged mill cranks 335-horsepower, and will shuttle lucky owners to 60 in just over four seconds.

Toyota sprinkled some of their performance dust on the Lexus RC F as well, with a new Track Edition; boasting 472-horsepower from its 5.0-liter V8 plus speed focused aero tricks and weight removal galore. 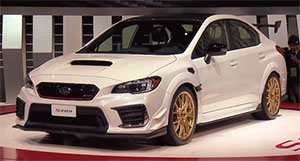 Yes, the biggest Kia ever, the 3-row Telluride crossover utility is finally a reality. Sharing chassis with the Hyundai Palisade, it’s brawny body has room for 8, with plenty of V6 power to haul them, and their gear, to whatever active lifestyle stuff they get into.

Speaking of cousin Hyundai, they debuted the Elantra GT N Line. It launches a new series that fits between their full N brand performance cars, and everyday models.  Confusion to follow.

Nissan’s Infiniti could be the next brand to unleash a full-EV SUV; and that could be just the beginning. This concept, the QX Inspiration, rides on an all-new platform that will be the basis for a wide range of electrified offerings. 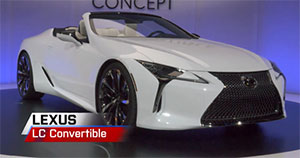 Technically, this Lexus LC Convertible is a concept, but it looks ready for prime time to us.  It also looks like a no-brainer; and would easily be the car to be seen in on the streets in Southern California and South Florida.

We’re told this crossover concept is a clear sign of what’s coming as GM transitions Cadillac to their lead electric vehicle brand.  Now, we didn’t actually see the vehicle, just these pictures, with no specific details, but Cadillac says stay tuned!

We’ve seen this diesel-powered Mahindra Roxor Jeep-lookalike for some time now; and as you might imagine, FCA has issues with the design, and has taken the brand to court.  But for now, it’s off-highway use only for this little runabout; making it the perfect mashup of an old CJ and a new Side-by-Side.

And it wouldn’t be a proper Detroit show without a Chinese car company saying U.S. sales are imminent. This year we have a 5-time return player as GAC Motor was back with its ENTRANZE EV concept, as well as production previews of several models including the GM6 minivan and the GS5 compact SUV.

And that’s it for the 2019 North American International Auto Show. We’ll be back in summer of 2020 for more from Motown!