As automakers look for new ways to showcase their vehicles, the Consumer Electronics Show in Las Vegas is becoming an increasingly important stage. 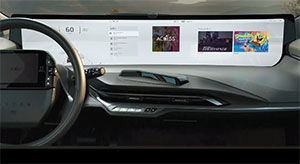 Chinese automaker BYTON made some eyeballs pop with their 48-inch screen that stretches across the dashboard of their first production model… the BYTON M-Byte electric SUV.

Bosch is bringing the sun visor into the 21st century. It tracks the sun’s shadow, keeping it over the driver’s eyes, while allowing a clear view of the road.

The Hyundai S-A1 is elevating ridesharing. They’re teaming up with Uber to produce air taxis that will eventually fly themselves.

Jeep is offically bringing plug-in hybrid power to the Wrangler, Renegade and Compass. Their new 4Xe sub-brand plans electrification for all models by 2022. 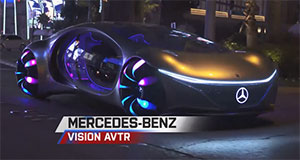 The Mercedes-Benz VISION A-V-T-R (Spell it out) concept eliminates the steering wheel, with the driver placing their hand on the center console to activate the car.

The BMW i3 Urban Suite gives a passenger plenty of room to stretch out, while ZeroG Lounger seats recline up to 60-degrees in the BMW X7. 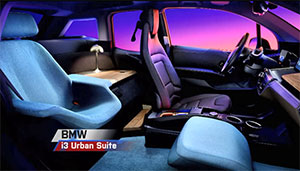 And Toyota will build “a prototype city of the future” in Japan… to research new technology in real life situations.

So for advance automotive technology, its full speed ahead. And that wraps up this week’s Motor News.