After a two-year pandemic hiatus, the New York International Auto Show was back in the Big Apple, and the reveals were bigger than ever. 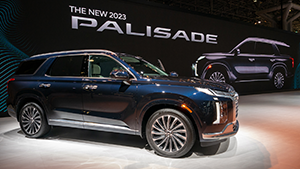 Jeep revealing stretched Suburban-sized versions of the full-size Wagoneer, the 2023 Jeep Wagoneer L and 2023 Jeep Grand Wagoneer L gain about a foot of additional length. And even bigger news under the hood, a twin-turbo inline-6. Jeep also showing off their new Carbide trim package, featuring plenty of gloss black trim on the outside. And Grand Cherokee 4xe buyers will be able to upgrade to a new High Altitude trim package.

Chrysler giving us a look at what the future may hold with this Airflow Graphite Concept.

The 2023 Hyundai Palisades getting a facelift and big tech upgrades inside. Variety in the form of the 2023 Kia Niro, making its US debut in hybrid, plug-in hybrid, and fully electric forms. With a few tweaks and new off-road trims, the 2023 Kia Telluride is ready for the outdoors. Kia also announcing their EV-9 electric SUV concept will be coming to the US in 2023. 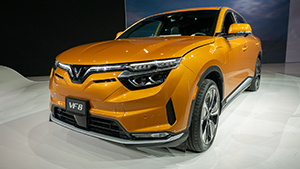 Nissan adding a little more go-anywhere by bringing back the Rock Creek package to the Pathfinder. And the Nissan Leaf getting a refresh, along with a simplified trim lineup, coming in just two trim levels for 2023: the S and SV-Plus.

With updated front fascia and revised body-cladding, Subaru giving a more distinctive look to the Outback, along with safety and tech upgrades. Toyota bringing their first-ever GR Corolla to the Big Apple for its big debut.

The all-new BMW X-7 showcases the “love it or hate it” kidney-grille design, along with updated powertrain options. Volkswagen creating some “buzz” of its own, showing off the first production model of their I.D. Buzz electric bus. Alfa Romeo doubling their SUV lineup to two with the debut of the all-new Tonale, the brand’s first foray into electrification.

Vietnam automaker Vinfast showing off their VF-8 and VF-9 electric SUVs, while breaking down their “batteries not included” pricing package. And if you brought your wallet, California startup Indi EV opening up for pre-orders at the show. The Indi One, a new crossover SUV, will begin production in mid-2023.

Worth the wait for those big debuts-- and that does it for this week’s Motor News!