“Most people associate the “JD Power” name with customer satisfaction surveys on vehicles and other products, but this year marks the 20th annual Vehicle Satisfaction Awards from AutoPacific, a marketing and consulting firm that surveys over 65,000 new vehicle owners around the U.S.” 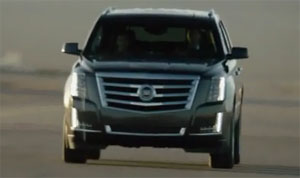 And it’s based on 50 measured aspects from the 2015 and 2016 model year vehicles – things like style, comfort, performance, and fuel economy. This year - the Cadillac Escalade --full-size SUV--earned the highest score ever in AutoPacific’s 20 years of testing. The vehicle was also named the overall winner, taking home the President’s award.

GM did well in other categories-- as the Chevrolet Corvette took the Sports Car honor…while the GMC Sierra 1500 earned the award among Light Duty pickups. The Hyundai Tucson won for compact crossovers…and the Kia Optima ranked highest for mid-size cars.

The survey also measures brands as a whole, and among the premium players, Tesla ranked the highest. The electric vehicle company narrowly edged out Cadillac and Lexus.

Among non-luxury, or “Popular” brands as they’re classified, Kia topped all others, outscoring 2nd place GMC by a fairly wide margin. Followed by Honda, Subaru, Hyundai and Chrysler.

“If there’s any takeaway from AutoPacific’s survey, it’s that customers clearly find “satisfaction” differs vastly from sales numbers and marketing hype. And that’s it for this week’s MotorNews.”