“Coinciding with the 25th anniversary of the Dodge Viper comes the unfortunate news that it will be discontinued for the foreseeable future. And with these two significant milestones comes lots of fanfare, and special attention.”

Fiat Chrysler Automobiles invited journalists out to their Chelsea Proving Grounds to take a look at Vipers from throughout the years…including the original concept car shown in 1989. 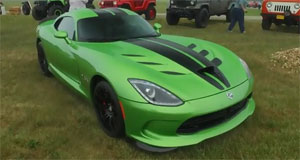 Elsewhere on the property, and much more in the forefront, were four special-edition 2017 models. Each one getting an attitude all its own. First was the Snakeskin Edition GTC, featuring a “Snakeskin” green paint job and a snakeskin-patterned racing stripe.

A little more serious in nature was the Viper GTS-R, featuring an iconic white with blue racing stripes exterior, and fitted with the ACR performance and aero package.

On the sinister side was this VoooDooII edition, also fitted with the ACR package, but dressed in a black and red color scheme.

And last, but certainly not least-- was the Viper 1:28 Edition ACR, commemorating the 1 minute, 28 second lap time set at Laguna Seca Raceway in 2015.

“Though we haven’t been behind the wheel of any of these speed demons yet, MotorWeek knows firsthand the incredible power that the Viper has brought throughout the years. And one last hurrah at our “Roade Course du jour” is surely in the works. And that’s it for this week’s MotorNews.”