The costly path towards a wide range of electric vehicles is causing more and more rivals to link up to share the load.

Toyota and Subaru are the latest. They plan to jointly develop a single, versatile electric vehicle platform. Initially they will use it to share a new small electric SUV, which will be sold under each company's own brand. This new platform will not just be for small utilities, however. It will be flexible enough for a variety of larger vehicles, including sedans.

This partnership brings together the strengths of each automakers. Subaru contributes their all-wheel-drive expertise, while Toyota delivers the electrification know how. The two companies first agreed to work together in 2005. Previous joint efforts include the rear-wheel drive Scion FR-S/Toyota 86, and Subaru BRZ sport coupes in 2012, and the 2019 Subaru Crosstrek Hybrid. Toyota says other EV partnerships could follow. 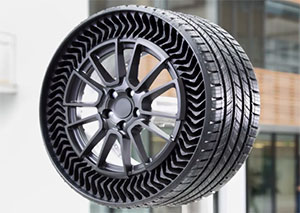 Another collaboration could keep the rubber rolling… while eliminating a common roadside break down.

General Motors and Michelin are testing an airless tire. It’s called Uptis… which stands for “Unique Puncture-Proof Tire System”. Instead of tires inflated with air, these tires use flexible rubberized composite ribs to support the vehicle. Similar tires are already used on some John Deer riding lawnmowers.

Michelin, a pioneer in pneumatic run-flat tires, says airless tires means no more worrying about blowouts or being stranded by a flat tire. Airless ties would also eliminate the need for regular tire maintenance like keeping them properly inflated. Airless tires might also reduce consumer car care costs by preventing uneven wear caused by too much or too little air pressure.

GM will start testing the Uptis Prototype in real world situations using a fleet of Chevrolet Bolt EVs later this year. They hope to have these airless tires on production vehicles by 2024.