We hear a lot about a future where cars will drive themselves. But, even before that, researchers envision autos doing more of the thinking through Artificial Intelligence.

Nissan is working on B-to-V, or “Brain-to-Vehicle” technology. Here, a driver wears a device that monitors brain waves. By tapping into the brain’s signals, their system can predict what the driver is going to do… and do it quicker… like emergency steering or braking.

Meanwhile, Volkswagen is teaming up with tech company NVIDIA to develop “Intelligent Co-Pilot” for their forthcoming I.D. BUZZ electric minivan. Here, sensors monitor both the inside and outside the vehicle. VW believes Artificial Intelligence can learn how to assess situations, analyze the behavior of others on the road, and then make driving decisions.

Nearer term, face recognition may soon replace a keyfob for unlocking your car.

And, even sooner, Amazon’s Alexa is coming along for the ride in Toyota and Lexus vehicles. Starting in some models this year, drivers will be able to talk casually to Amazon's cloud based service rather than using the precise words and phrases most other voice recognition system demand. 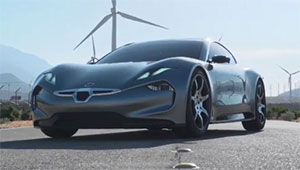 California based Fisker Incorporated is among the latest to enter the electric car arena. But, it’s how they will power their future EVs that could have the biggest impact on the automotive industry.

Fisker plans to launch this wild Emotion electric sedan in 2019. They claim it will have a range of 400-miles between charges by using a denser lithium-ion battery pack. Beyond that, the company has filed patents for their research with solid state batteries. Fisker thinks this digital technology could ultimately increase electric driving range beyond 500-miles, while decreasing the charging time to a minute or less.

Of course, time will also tell if these innovative ideas become everyday realities. And that’s it for this week’s Motor News.