Self-driving cars with little or no human input are moving closer to reality… and they’re being developed in a variety of ways. 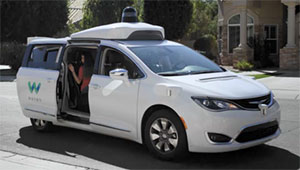 Waymo’s pilot program in the Phoenix area…. has been testing the technology during daily commutes with ordinary people. Now, they’ve launched a ride hailing service called Waymo One. It’s available to the Phoenix public at large. Riders use an app to request a ride. While they call it a commercial “self-driving” service… trained drivers will be in the vehicles for the time being. But, the goal is to have fully autonomous taxis. Waymo’s fleet includes Chrysler Pacifica minivans. They’re also working with Jaguar to offer premium rides without a driver. The deal involves adding the all-new electric I-PACE SUV to the self-driving fleet next year.

But, self-driving is not just for “delivering” passengers. What about making shopping more convenient? Ford, Walmart and Postmates are working on bringing self-driving deliveries to your door. Walmart fills the order, Ford provides the vehicles, and Postmates handles the delivery logistics. They’ve started testing in Miami, Florida, but expansion is expected. 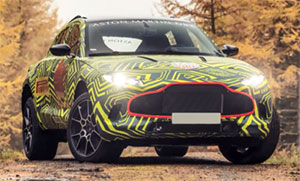 Now back to the current way of doing things---in the you know “drive it yourself world”, Aston Martin is joining the ranks of luxury car makers by adding an SUV.

They’re currently testing a prototype Aston Martin DBX in real world situations, ranging from frigid arctic temperatures to scorching jungle heat. Their sports car lineage means the SUV’s testing will include Germany’s demanding Nyür-bur-gring racing circuit. We’ve been watching the development of this well-bred ute ever since the concept appeared in Geneva a few years ago.

We expect the Aston Martin DBX to go on sale by the end of 2019. And that’s the latest automotive update for this week’s Motor News.