“The Corporate Average Fuel Economy standards…better known as ‘CAFE’ have been in place for more than 40 years. But with the recent shakeups in gas prices and consumer buying habits, big changes are brewing for automakers. 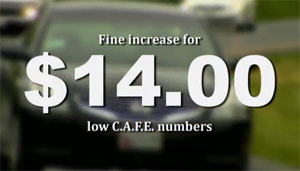 First off-- the National Highway Traffic Safety Administration will more than double the fines…from a 5.50 rate to 14 dollars… on automakers who fail to meet upcoming CAFE standards. A manufacturer is fined for each one tenth of an MPG under the standard, multiplied by the number of vehicles they sell for that model year. Do the math, and that’s a much larger penalty for delinquent automakers to pay.

The second bit of news is that the EPA’s evaluation of 54.5 MPG as the overall CAFE target will not be achieved by the 2025 deadline. With lower gas prices spurring customers’ appetites for more trucks and SUVs, it just isn’t likely to happen. The EPA is expected to call for a more realistic standard of around 50 MPG, which would equate to a window-sticker “combined rating” of about 36 miles per gallon.

“One company that’s not concerned about the CAFE requirements is Tesla…though they’ve had plenty of their own headaches in recent months.” 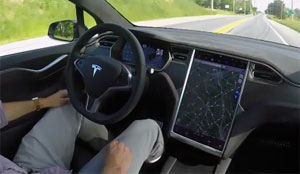 The company’s Autopilot system – a semi-autonomous feature that can take over steering, braking, acceleration, and even parking – has been involved in at least three recent accidents, one of them fatal.

These incidents have prompted calls for Tesla to disable the feature until a thorough investigation can be done and fix whatever bugs exist. Tesla has so far refused. CEO Elon Musk says they’re working closely with suppliers Bosch and Mobileye to improve the system.

“Lots of big headlines in the automotive world and as always, we’ll keep you updated. But for now, that’s it for this week’s Motor News.”