JOHN DAVIS: The Windy City is suffering through a nasty winter with record low temperatures. Still, things were “all systems go” for the 2014 Chicago Auto Show.

BMW is overhauling its X3 crossover for 2015-- with a refreshed exterior and interior, new rear wheel drive only models, and a diesel engine option.

Diesel will also be coming to the 7 Series sedan in the form of this 740 long wheelbase xDrive model. 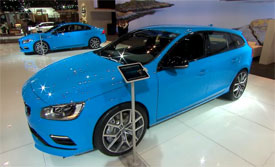 Volvo made a statement with two Polestar models: the S60 sedan and V60 5 door, both with a turbocharged six cylinder good for 345 horsepower- in their signature Rebel Blue paint.

Kia joined the plug-in EV game with the 2015 Soul EV, featuring a 27kWh lithium-ion polymer battery good for 80-100 miles of range. This debuted alongside a refreshed Optima Hybrid, due out this spring. 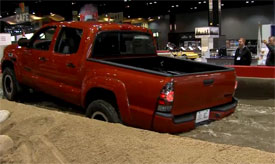 And Nissan put a 4-cylinder Cummins turbo-diesel in its mid-size Frontier to see what show goers might think.

YOLANDA VAZQUEZ:  And that’s what the wind blew in for the 2014 Chicago Auto Show, and our round up of this week’s Motor News.