Big EV waves being made at this year’s Consumer Electronics Show in Las Vegas with the all-electric Chevy Silverado leading the charge.

With a GM estimated 400 mile range, the 2024 Silverado EV will be available in two models when it’s first launched: the RST First Edition and the fleet oriented WT edition, both sitting on G-M’s Ultium EV platform. The WT edition will roll out in the spring of 2023 with a price tag of $39,900 before destination charge, followed by the RST First Edition in the fall, with a price tag of $105,000.  And the Silverado wasn’t the only big news from General Motors at the show, the automaker announcing two more electric SUVs are on the way: the Chevy Equinox EV and Blazer EV. Not a whole lot of info given on either, just that the Equinox EV will boast a starting price around $30,000 and both SUVs will hit dealers in 2023.

Chrysler unveiling their sleek Airflow Concept, which they say represents the start of the brands journey towards a fully electric future and promised their first battery-electric vehicle by 2025. 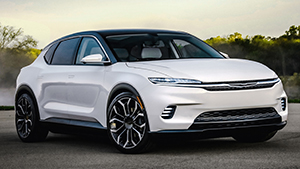 BMW revealing a performance version of its iX electric SUV: the iX M-60. With an estimated range of 280 miles, the M60 can produce up to 610 horsepower and 811 pound feet of torque, which BMW claims can send it from zero to sixty in 3.6 seconds.

And in a push to become a global automaker, Vietnam’s Vinfast showing off their all-electric lineup at CES 2022. The soon to be all electric maker showed the VF 5, VF 6, and VF 7, along with two models previewed at the 2021 LA Auto Show: The VF e35 and VF e36, now renamed simply V-F 8 and V-F 9. These two electric SUVs will likely be the company’s first entry into the North American market later this year.

An electrifying show, with big plans from automakers for the future, and that does it for this week’s Motor News!