It’s September and that signals the start of the international auto show season. So, let’s head east to Frankfurt for the latest.

The Frankfurt Motor Show is always a mixture of automotive eye candy and Germanic practicality, and the 2013 edition was no exception. 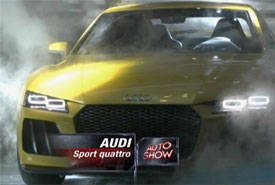 German brands were front and center of course, and none made a bigger splash than Audi with its Sport quattro concept. Clearly a celebration of Audi’s past, yet the design and plug-in hybrid power train obviously point to the future.

BMW had plenty to show, including the 3rd generation X5, accompanied by a PHEV eDrive Concept. And the production version of their new premium EV, i8 sport coupe, one electric that won’t leave the driving fun behind.

While the Mk7 Volkswagen Golf has yet to reach our shores, Europeans will soon be driving a new high performance 296-horsepower Golf R.

Mercedes-Benz expands their crossover lineup when the compact GLA arrives here next fall. But, no time table yet for the new S-Class Coupe’ shown in Frankfurt in concept form.

The Lexus brand may be headed that way as well, and this brushed silver brut LF-NX previews what it could look like.

A new compact CUV is from Nissan. The European X-Trail, known as Rogue here, will now be offered with seven seats.

Volvo has been very quiet of late, but that’s about to change with this Concept Coupe. It’s the most dynamic Volvo in decades.

Part utility, part hatchback, part coupe Infiniti Q30 is the latest in a long line of sleek and seductive concepts from this Japanese luxury brand.

Only 299 editions of this Fiat 500 Abarth 595 50th Anniversary special will be produced. Let’s hope a few of those make it to us.

We’re not sure if the Kia Niro shows where the brand is headed in the future, or not; but if so we’d love to be along for the ride.

The Bentley brand has a long history of performance, and the twin-turbo Continental GT V8 S proves they’re ready to make more.

A hybrid diesel is something we’ve been waiting for. But, sadly these hybrid-diesel Range Rovers aren’t due in America anytime soon.

But we will get to drive this Jaguar sports crossover when it goes into production soon.

And that’s the best of flash and viable from the 2013 Frankfurt Motor Show.