Automakers working together to save money is nothing new… but the push for electric vehicles and autonomous driving… is stepping up the pace of these partnerships.

Ford and Volkswagen are accelerating their plan to co-develop future vehicles.  The two companies announced they are now investing in autonomous vehicle platform company Argo AI.  Both Ford and VW will use Argo AI’s self-driving technology for their own vehicles.

The collaboration between Ford and Volkswagen also covers electric vehicles.  Ford will be the first competitor to use Volkswagen’s Modular Electric Toolkit dedicated electric vehicle architecture.  For Volkswagen… the deal helps cover some of the $7 billion they’ve spent developing their electric chassis and new I.D. subbrand.  Ford hopes to use VW’s platform to produce more than 600-thousand electric vehicles for Europe during the next six years.  That’s in addition to the 15 million cars Volkswagen Group has planned in the next decade.

And as Volkswagen is charged up about a future full of EV’s… it’s the end of the line for a car that was the global symbol for the German brand. 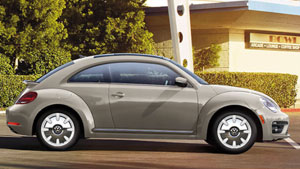 The last Beetle has rolled off the assembly in line Mexico.  A blue coupe is the last of the third generation Bug.

The original Beetle was designed in 1938, but it was after World War 2 ended when the "People's Car" went into serious production.  Over the course of 8-decades… more than 21-million Beetles were sold in 91-markets around the world.  A vast majority of those were the first generation model between the mid-1940’s and 2003.

VW has stopped Beetle production before… so there’s always a chance it could be reinvented as an electric car.  The last Beetle is heading to a museum.  That plant in Mexico will start producing a compact crossover bound for the U.S.  And that does it for this week’s Motor News.