“Always flashy and funky, the Geneva Motor Show is an annual look at how the car world thinks when the American market is of minor concern. But this year we saw plenty that should make it here to the states.” 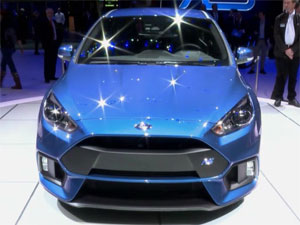 The hot hatch segment gets hotter with a new Ford Focus RS. Output notches up well over 300 horsepower with all-wheel drive included. Long wished for by U.S. enthusiasts, the Focus RS should arrive here next year.

The Honda Civic Type R ripped onto the scene, boasting 300-plus horsepower from its edgy, front-drive platform. No word when, or if, it will bring its act to America.

On its way to us is a reworked Hyundai Tucson, more ready than ever to tackle the growing compact crossover market. 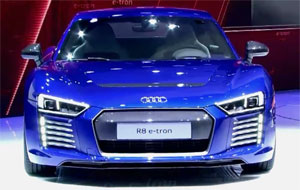 Audi finally gave us a new R8 supercar, with more power, and less weight… and an all-electric e-tron version.

Act Two for Audi’s Prologue Concept from LA, is this Avant wagon concept for Geneva. Besides more room out back, it sports a plug-in hybrid powertrain.

Kia went wagon-wild with this Sportspace Concept. We hope they’ll use a few front end cues for the next Optima sedan.

Bentley chose to speed things along with the EXP 10 Speed 6 Concept. Smaller than anything they now offer, it could signal a new breed of more modern Bentleys.

We also eyed some serious speed from Aston Martin, with this all-electric, all-wheel drive DBX Concept. 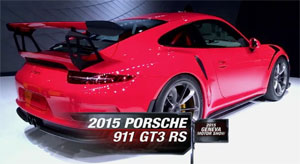 Porsche massaged some favorites, showing off this 911 GT3 RS……and the Cayman GT4.

Infiniti unveiled a more defined version of the QX30 Concept, sharing its platform with the Mercedes-Benz GLA.

“So lots of eye candy with more than a little substance, that’s it for Geneva 2015 and this week’s MotorNews.”