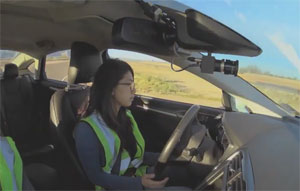 There’s been a lot of talk about autonomous cars in the news lately, but now we’re getting a better idea as to when the technology could end up in your driveway. Recently, Ford’s Vice-President of Research and Advanced Engineering, Ken Washington, spoke at the annual SAE International World Congress. The Detroit News reports him saying “private” car owners may have to wait until as late as 2031 for self-driving vehicles. Ford has said they plan to have fully autonomous vehicles on the road in 2021, but those would be for “commercial” use as ride-hailing or ride-sharing services. Their plan calls for SAE level 4-capable vehicles that will operate without a steering wheel, gas or brake pedal.

YOLANDA VAZQUEZ: Opel is leaving the GM family, but they’ll still be building Buicks. We saw the 2018 Buick Regal TourX wagon and the four-door Regal Sportback at the New York International Auto Show.  Both will be made in Germany. This is the first time Buick is offering a wagon since the 1990’s. In March, GM announced a deal to sell its Opel/Vauxhall automotive operations to French automaker PSA Group. GM’s Executive Vice President of Global Product Development, Mark Reuss, told Reuters "Opel is still doing some of our future models." The new Buicks are expected to go on sale in the U.S. at the end of the year.

And that’s the most recent roundup of automotive headlines for this week’s Motor News.