“With conventional EVs becoming more mainstream, hydrogen fuel cell vehicles are once again making a push for relevancy. Entries from Volkswagen, Audi, and Toyota all made headlines on this year’s auto show circuit.”

Of those, none is more realized than the Toyota Mirai. Already in production, and due to go on sale in California this October, the Mirai will try to get hydrogen fuel cell vehicles back in the public eye.

Using compressed hydrogen, sourced everywhere from water to animal waste, Fuel Cell technology generates electricity, stores it in a battery pack, and uses it to power an onboard electric motor. Where plug-in EVs only manage 80-100 miles per battery charge, The Mirai we drove in April had a range of over 250 miles per fill up.

Recently, Toyota made a public showing of the Mirai in a most unusual locale: Titusville, Pennsylvania; the birthplace of the modern oil industry. Using water from the town’s famed “Oil Creek”, engineers extracted hydrogen, compressed it, and filled the Mirai’s tank. 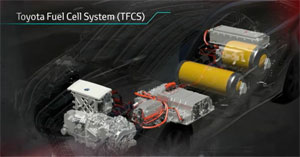 The fuel cell exposes the compressed hydrogen and oxygen from the environment, to catalysts, which then generates electricity and water as byproducts. No combustion power, no exhaust fumes, and no plug!

“Toyota showed the residents of the historic oil town a newer, cleaner way to view the auto industry they helped revolutionize more than a century ago.

And that’s it for this week’s Motor News.”