Minivans are the latest round of vehicles tested by the IIHS in their small overlap front crash test. Though the sampling was few, the results are far-reaching.”

The test is conducted at 40 miles per hour-crashing a 25 percent section of the vehicle’s front end into an immovable barrier. The poorly rated Chrysler Town and Country and Nissan Quest saw significant intrusion into the passenger compartment- with the instrument panel, steering column and pedals being forced into the driver’s legs, knees and feet. The damage to the Quest was so severe that the front seat had to be cut out before removing the dummy.

The Sienna’s acceptable rating resulted from a “marginal” structural score, combined with “good ones” for restraints and injury prevention.

And with a rating of good, the previously tested Honda Odyssey, stood as the benchmark.

It should be noted that nearly all of the minivans tested are nearing the end of their life cycles, and should see significant overhauls and redesigns in the near future. And you can be sure safety will be even more of a priority for these family haulers. 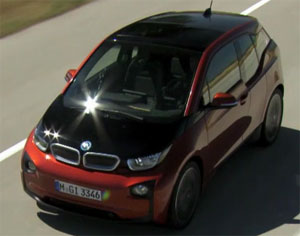 “Though the LA Auto Show has come and gone, a lasting honor from the annual gathering is the Green Car of the Year Award. And this year’s winner was certainly an unconventional one.”

The BMW i3 was this year’s top pick.

With its carbon-fiber reinforced plastic body, electric powertrain, optional gas engine range extender, and sustainably produced interior materials, the i3 stood out as an exceptional example of efficient motoring. Other contenders included the Audi A3 TDI, Chevrolet Impala Bi-Fuel, Honda Fit, and the Volkswagen Golf family.

And that’s it for this week’s MotorNews.