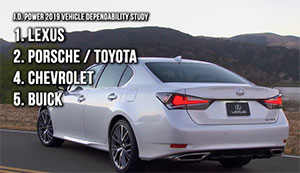 Many factors go into buying a car, including long term reliability. To help in that decision, J.D. Power has released their 2019 Vehicle Dependability Study.

For the eighth year in a row Lexus tops the list. The poll states that Porsche and Toyota tied for second, while Chevrolet and Buick round out the top five.

For the first time in the 30-years J.D. Power has conducted the study--- all German brands are better than the industry average. And they rank the Porsche 911 as the Most Dependable Model.  It’s the first year for that award.

The study is based on responses from almost 33-thousand original owners of the 2016 model year vehicle-- after three years of ownership.

Despite the well-known dangers of distracted driving… many people are still not getting the message… prompting them to fiddle with their phones. 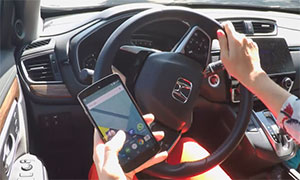 The Insurance Institute for Highway Safety found drivers were 57-percent more likely to be operating a cellphone by hand in 2018 than they were 4 years ago.  That includes dialing, sending text messages and browsing the web.  At the same time, there was a slight drop in the number of drivers seen “talking” on a hand-held cellphone.

The study also found that about 23-percent of drivers were involved in at least one distraction activity which can include talking, eating and grooming.

The IIHS says more than 800 crash deaths in 2017 could be attributed to people physically operating their phones.

And, that’s it for this week’s Motor News.