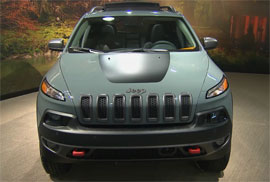 Proving once again there are no secrets in the automotive world- the folks at Jeep were forced to reveal their latest vehicle--ahead of schedule after spy-photos appeared on the internet.

The 2014 Jeep Cherokee was supposed to be one of the many surprises at the 2013 New York International Auto Show; a revival of the brand’s most global nameplate. But after spy photos showed up on the Jalopnik website, declaring the SUV alive and kicking, Jeep saw an opportunity to gain a little free publicity, and teased images of the new Cherokee well before its official debut at the New York show.

The throngs of media seemed even more anxious to get their first real look at the new, smoother styled, front and all-wheel drive Cherokee that shares a unibody with the Dodge Dart. Jeep promises the new Cherokee’s capability will live up to the brand’s “trail-rated” mantra.