Lamborghini has revealed the reboot of one of the car world’s most iconic supercars….and this time, it’s packing some electrification. 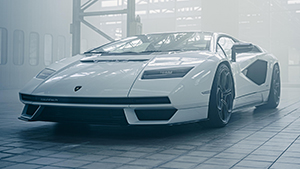 Lamborghini stole the new introduction show at the annual Pebble Beach Concours with the unveiling and rebirth of their legendary Countach supercar. The all-new LPI 800-4 embraces both the past and present by combining the brand's legendary naturally aspirated V-12 power with hybrid motor electric assist.

This blast from the past sports 802-horsepower. The new 6.5-liter hybrid looks a lot like the 1970s original, including those scissor doors. 112 buyers have already pledged the speculated $2.5 million dollars for each of the limited run supercar, which should start arriving before the end of the year. Lamborghini is not the only one making a splash at Pebble Beach.

Audi making some waves of its own.

Audi debuting their skysphere concept vehicle…which is a whole lot like a transformer. It can go from a comfy grand tourer to a sporty roadster at the touch of a button. Electric motors and telescoping structural elements extend or retract the skysphere’s entire front end, actually altering the wheelbase of the car. While in the autonomous “grand touring” mode, the steering wheel and pedals go under the dashboard. But in sport mode, they pop out, giving driver’s the option to, well, actually drive. 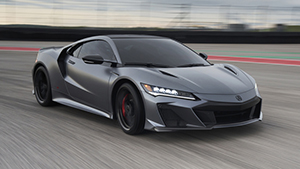 While we’re getting a peek at some new models on the horizon, some old favorites are fading away.

After 26 years, the Toyota Avalon sedan will be driving off into the sunset in 2022. Declining sales and buyers' love of SUV’s likely played a part in the Avalon’s demise. And Acura sending the NSX off with a bang…retiring the super car with a higher performance Type S variant. Acura will only offer a limited run of 350 units of the supercar globally. What a way to say goodbye!