Mercedes Vision of the Future 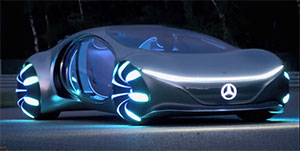 Due to the ongoing pandemic, the automotive media as a whole has had to shift gears when it comes to gathering the latest new car info and video …but that hasn’t stopped us…only made us think outside the driver’s seat.

We first got a look at the Mercedes Benz vision A-V-T-R, a concept vehicle inspired by the movie “avatar”, at the consumer electronics show in January.

But with the power of technology, we were able to work with crews on the ground in Germany to get this insider footage. Its futuristic design is what pulls you in. 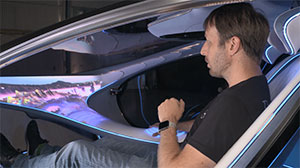 Adding to the out of this world element…those wheels! They aren’t just for looks though… each one houses a high performance electric motor, producing more than 350 kilowatts.

But what really seals the sci-fi deal is the crab like, sideways movement the vehicle can make.

Inside, there is no steering wheel. Instead, the driver places their hand on the center console and the vehicle comes to life.

“So what I can do here is put my hand here on the central element and now you can see the whole car starts to light up and this pulse of energy goes throughout the interior as it wakes up. And att the same time, here at the motor control, I can really feel my heartbeat, so the car is really connecting to me at different levels, I can feel this physical connection almost.” 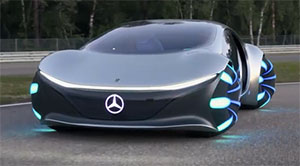 If that all seems a little too far off, the theme of sustainability modeled throughout the vehicle might be a little more within reach.

The entire vision A-V-T-R is made from 100 percent recyclable materials with zero carbon footprint.

The battery packs used to power the all-wheel drive vehicle use a graphene-based organic cell chemistry…which Mercedes says eliminates the use of rare, toxic, and expensive earth elements.

Even if the future is far out, the vision A-V-T-R falls in line with the Mercedes-Benz “ambition 20-39” plan, which aims to have a completely carbon neutral fleet by 20-39.

The father of one of the most groundbreaking automotive inventions has died. John J Mooney was the co-inventor of the three- way catalytic converter. 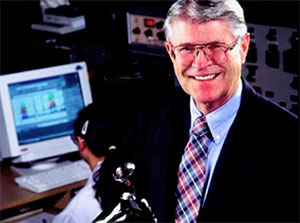 The emission control device was introduced in 1975…and was still the talk of the town when MotorWeek hit the airwaves 40 years ago!

The piece of equipment has become standard on nearly every vehicle that has hit the road since.

The environmental protection agency estimates that Mooney’s invention has saved over 100 thousand lives and prevented hundreds of thousands of throat and lung ailments caused by the emissions from internal combustion engines.

Amazon is shaking things up with a big buy in the self-driving startup world. The company has acquired Zoox and says they will work together to bring Zoox’s vision of autonomous ride hailing to reality.

There’s also been chatter that Amazon could use Zoox’s technology to deliver packages instead of people…but no official word on that.

Amazon bought the startup for a reported 1 point 2 billion dollars. A whole lot of money, but a whole lot of potential too….and that does it for this week’s Motor News.