The 46th annual Miami International Auto Show opened much earlier than in previous years---giving South Floridians the chance to “feel the heat” of the newest and most talked about vehicles.

Miami was also the world debut of the 2017 Nissan Sentra SR Turbo. More mightier than the base model-it features a 1.6-liter turbocharged 4-cylinder engine pumping out 188-horsepower. That’s a 50-percent boost over the Sentra SR.

Another spicy entry, the Alfa Romeo Giulia Quadrifoglio, drove away with the “Star of the Show” award. 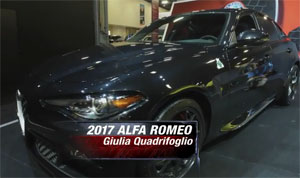 The 2017 Honda Accord Hybrid made its first appearance at an auto show.

While Volkswagen tapped into the vibrant “Florida feeling” with a bright-colored Beetle… decked out in “Fresh Fuchsia Metallic”.

With vehicles from more than 40 of the world’s top manufacturers, Magic City turned up the heat for the first major auto show of the season…. And that’s the latest for this week’s Motor News.