Midsize SUV’s have now surpassed mid-size sedans in popularity—and two of them are shining brighter than the rest.

The 2017 Hyundai Santa Fe and the 2017 Volvo XC60 are the only models to receive “good” ratings for headlights in the most recent study by the Insurance Institute for Highway Safety. The IIHS looked at 37 midsize SUV’s with a total of 79 headlight combinations. All the vehicles in this study that earned “good”, or “acceptable” ratings, have projector lenses. But it was the combination of the projector lenses, the High Intensity Discharge lamps, and some form of curve adapting feature, that earned both the Santa Fe and XC60 the extra points. And it’s also worth noting that those systems are extra cost options. 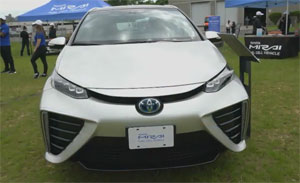 And you may have seen one of these vehicles in your neighborhood. At the first ever festival of its kind, one Japanese automaker received special recognition for its green motoring endeavors.

And that’s the latest info update for this week’s Motor News.