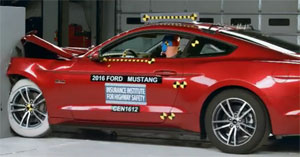 “Iconic styling, straight-line speed and high-performance engines are all trademarks of American muscle cars. And though they may look cool out on the open road-new crash test results hat a trio of top-selling brands all miss the mark when it comes to passenger safety.”

The Insurance Institute for Highway Safety doesn’t normally test low-volume sports cars or luxury vehicles. But knowing that safety is a large part of ANY vehicle--- they decided to run a battery of tests on the 2016 Ford Mustang, Chevrolet Camaro, and Dodge Challenger. They chose the optional V8 engines mainly because of their widespread popularity. Final results showed that none of the vehicles earned a Top Safety Pick Plus, or even a Top Safety Pick rating.

The Mustang was deemed the safest overall, but lacked enough structural support to do well in the “critical”, small, overlap front test. The Camaro did score a “good” rating in that test, but had no forward collision systems or alerts like the Mustang, and only earned an “acceptable” rating in roof strength. The Challenger was rated the worst, with significant small overlap crash damage, and a mix of “good” and “acceptable” ratings elsewhere.

The IIHS small overlap front test has been notoriously difficult for any vehicle to pass, let alone a muscle car. Yet because of a large number of fatalities, this crash test deserves a lot of attention.

“The Institute hopes that these results will spur a move towards better passenger safety for muscle cars, so there won’t be any “weaklings” roaring down the roadways. And that’s it for this week’s MotorNews.”