We mentioned it earlier in the show and now it appears closer to fruition. Ford will soon add traditional knobs and buttons as a companion to their MyFord Touch infotainment systems on future vehicles.

You’ve heard the complaints from us here at MotorWeek-along with journalists and owners everywhere- about the MyFord Touch infotainment system. Customers have commented-for at least the past two years- that it can be frustrating and difficult to use while driving. 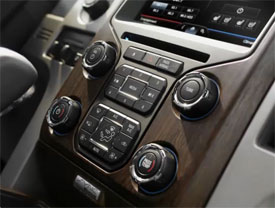 Combined with its SYNC operating system, MyFord Touch is supposed to be a “distraction-free” approach-that’s on the cutting edge of vehicle technology. But when in use- its complex and cluttered touch screen seems to hinder more than help drivers.

But, on the 2013 F-150, Ford offers a Lariat trim level with a revamped center stack that includes SYNC and MyFord Touch, but also adds traditional volume and climate controls below. It’s a configuration that Ford plans to add to most models moving forward. With a decline in quality ratings due to a convoluted “touch screen” interface—this long-awaited return to more user-friendly knobs and buttons should push the “Blue Oval” back towards the top.