It’s the big show in the Big Apple, as the 2013 New York International Auto Show reveals some long-awaited, world debuts and a few surprises, too. 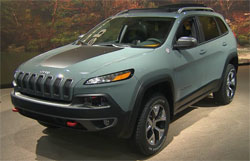 The most “buzz-worthy” unveil was a rethought Jeep Cherokee, matching “Italian style” with a 9-speed auto, and a locking rear-diff for the Trail-Rated Trailhawk model.

Cadillac upped its global status with a larger CTS, sporting a new twin-turbo V-6 for direct battle with the BMW 5-series and Mercedes E Class.

The night before the show Audi gave us a peek at the much anticipated A3/S3 sedans, aimed squarely at American buyers and the Mercedes-Benz CLA…who upped the ante with a 355 horse CLA45 AMG. The three pointed star also announced its first EV for America, the B-Class Electric Drive. 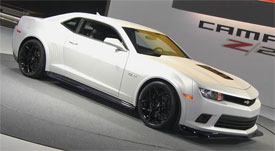 But the show’s big surprise was the return of the Camaro Z/28. Track ready, it drops weight and adds a dry-sump 7 liter V8. Speaking of track stars, this SRT Viper TA, or Time Attack, also sheds weight but stiffens the dampers.

Carving up streets will be fun when this unexpected Subaru WRX Concept is reality. It overshadowed the new XV Crosstrek Hybrid, the brand’s first gasoline-electric effort.

Kia’s quirky Soul keeps its look but grows in size; and their Forte lineup expands with a new Koup.

Scion updates its most popular model- the front drive tC Coupe. As did Buick with its flagship LaCrosse…and sporty mid-size Regal sedans.

…And finally, the new Volkswagen Golf arrived stateside, and was promptly anointed “World Car of the Year.”