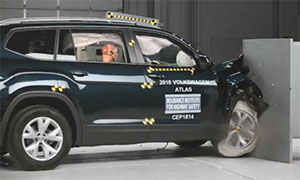 Part of the appeal of sport-utilities is the perception they’re safer because of their size and height. But it seems that level of protection varies depending on where you’re seated.

Recently the Insurance Institute for Highway Safety conducted crash tests on midsize SUVs. But this time, they focused on front passenger-side protection. In their small overlap test, a-quarter of the front end on the right side hits a barrier at 40-miles per hour. Six of the eight midsize SUV’s tested earned a good or acceptable rating for passenger-side protection.

The 2019 Kia Sorento, 2018 Volkswagen Atlas, and 2018 GMC Acadia, took the top three spots with good ratings. The popular Ford Explorer and Jeep Grand Cherokee were at the bottom with poor ratings.

IIHS has been rating vehicles for small-overlap “driver-side” protection since 2012, and added the passenger side test last year. Earning a good or acceptable rating for the passenger side is part of its Top Safety Pick + (plus) requirement.

Electric cars don’t dominate the passing lanes yet, but there are clearly more of them. 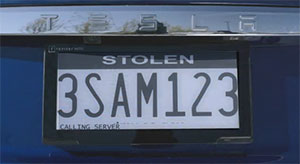 The International Energy Agency counted over 3-million EVs on the road globally in 2017. That’s up 54-percent over 2016. The largest market for EVs is China, but Norway has the highest concentration. The IEA projects there will be at least 125-million electric cars by 2030.

Chinese backed startup SF Motors wants to help fuel the trend. They plan on building electric vehicles at a new plant in Indiana by 2020.

Hi-tech is coming to a low tech part of your car… the license plate.

Sacramento, California is testing digital license plates on the city’s fleet.  Reviver Auto makes them and says the new plates can track the vehicles, issue alerts if they’re stolen, and display messages. But new technology isn’t cheap. They cost $699… plus a $7.75 monthly fee. If California’s pilot program is successful, they would be sold through car dealerships.

Reviver Auto says other states are also looking into the technology. That does it for this week’s Motor News.