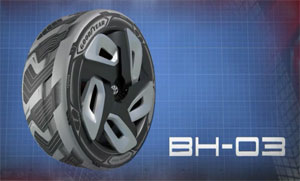 With technology deeply ingrained within every aspect of today’s vehicles---you might think that tires are being overlooked---but that’s not true. Tire giant Goodyear is staying ahead of the curve with a pair of concept tires that might one day “find traction” with consumers.

The first tire, codenamed BH-03, actually generates electricity which could help charge hybrid and electric vehicles. It captures the heat produced by road friction, tire air pressure, and sunlight and then converts that heat into useable energy for a battery pack.

The second concept, the Triple Tube tire, has, as the name implies, three tubes within the tire. Each can inflate or deflate separately from one another, to provide maximum traction in any given condition. Designed to be an active system, the tires could shapeshift on the fly, through GPS location or driver control.

Now, as with concept cars, there’s no word on if these tires will ever make it to production. But clearly there are some innovative ideas being thrown around and it’s about time we had some “rad rubber” to go along with them. And that’s it for this week’s MotorNews.