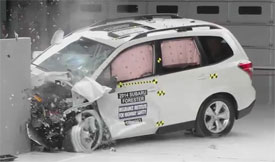 There was a lot of fuss last year over the Insurance Institute for Highway Safety’s new small overlap frontal crash test. Especially after several, top-selling luxury sedans received less than flattering grades. This time around, small SUVs were the focus and the results were just as poor.

Of the thirteen utilities tested by IIHS, only the 2014 Subaru Forester received a “Good” rating. The 2012 Mitsubishi Outlander Sport earned an “Acceptable” rating, making both vehicles the only two Top Safety Pick Plus winners in this test where the front left corner hits a barrier at 40 miles per hour.

Even more troubling were the five SUVs that received “Poor” ratings. They include the Ford Escape…Jeep Patriot…Hyundai Tucson…and Buick Encore. All saw major structural damage, failures in restraint systems, and compromised occupant safety.

While we’ve frequently seen the BMW i8 supercar in concept form at auto shows-- very few have seen a production-ready version out in the open…That is until now.

We have it on good authority that this is the latest version of the BMW i8. It was caught by our Eye Spy crew while testing in Europe just a few weeks ago.

Still decked out in camouflage, the design seems to be running on par with the concept first shown in 2009. The plug-in hybrid powertrain mates a 3-cylinder turbocharged gas engine with a range extending electric motor, boasting 350 horsepower.

With dynamic styling, and engineered from the ground up, the i8 will offer performance and efficiency, in a futuristic package not typically seen from BMW.