The quest to harness power from the sun has taken many forms over the years… and now there’s a new effort to drive only on sunshine. Toyota is working with electronic giant Sharp and others to develop a car the runs on solar power. They’re using a Prius test car in Japan with flexible solar panels on the roof, hood and rear hatch. We’ve seen other experiments with solar powered cars, but they were usually small with limited practicality. This research offers the possibility of moving a passenger car for what Toyota says is up to 35 electric-only miles from solar energy alone.

Like it or not… autonomous cars are coming… and the pace is picking up to bring driverless cars to American roads. Working with Argo AI, Ford will test autonomous technology in Austin, Texas. It’s the third place in the country they’re seeing how these vehicles operate on city streets. Miami-Dade County Florida and Washington, D.C. are their other test sites. 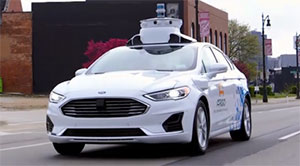 Supporters of driverless vehicles say removing the human factor can make them safer. And rising speed limits are taking a deadly toll on the road.

The Insurance Institute for Highway Safety says higher speed limits during the past 25 years have cost nearly 37,000 lives. States set their own speed limits, as 55 is no longer the rule everywhere. The IIHS study found a 5 mph increase in the maximum highway speed limit yields an 8-percent increase in the fatality rate.

So, slow down and drive safe. And, that does it for this week’s Motor News.