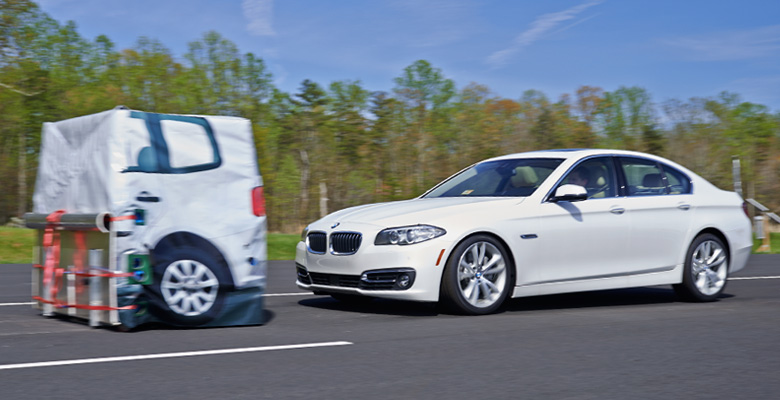 Autobrake Helps Manufactures Earn Top Ratings for Front Crash Prevention Twenty-one out of twenty-four cars and SUVs earn an advanced or higher rating in the latest round of the Insurance Institute for Highway Safety (IIHS) evaluations. The Insurance Institute for Highway Safety (IIHS) recently tested cars equipped with collision warning and automatic braking systems. Cars that warned the driver of a potential collision and applied the automatic braking system received a superior rating.

According to IIHS, auto manufacturers are making strides in adopting the most beneficial systems with automatic braking capabilities and are offering these features on a wider variety of models.

"We are already seeing improvements from automakers since the initial launch of our ratings last September," says David Zuby, IIHS executive vice president and chief research officer. "BMW and Lexus, for example, have added more braking capability to their systems, which has paid off in higher ratings."

General Motors did well in the testing as the Buick Regal, Cadillac CTS, Cadillac XTS and Chevrolet Impala also earn a superior rating when equipped with the company’s forward collision warning and autobrake system. The 2014 Buick LaCrosse earns an advanced rating when it has the same system.

The BMW 3 Series, Lexus IS, Audi A3, Audi A6, BMW 3 Series, Dodge Durango, Lexus GS, Mercedes-Benz CLA, Infiniti QX50 and Infiniti QX70, all 2014 vehicles, also earned advanced ratings. The advance rating was given to vehicles that warned drivers of a potential collision however their braking systems reduced the speed only moderately and did not stop the vehicle completely. The 2013 BMW 3 Series, the 2014 Infiniti Q70 and the 2014 Toyota Avalon earned basic ratings. This means they warned drivers of a potential collision but reduced the car's speed by less than 5 mph.

"We know that this technology is helping drivers avoid crashes," Zuby says. "The advantage of autobrake is that even in cases where a crash can't be avoided entirely, the system will reduce speed. Reducing the speed reduces the amount of damage that occurs to both the striking and struck cars and reduces injuries to people in those cars."

For more information about the recent IIHS testing and results click here. Take a look at this video IIHS posted of the testing.